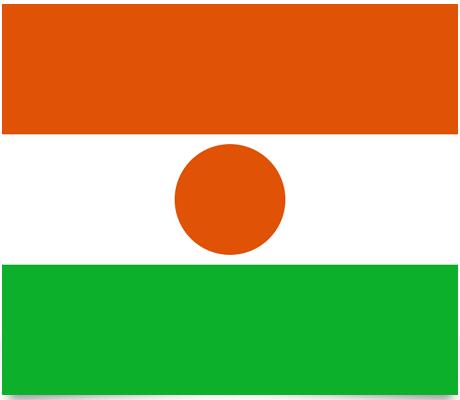 The colors of Niger’s tricolors symbolize its orange parts in the northern parts of the country in the desert of Sarah. White is the river Niger and the green area represents the southern more green part of the country and also the hope. The great sun in the middle of the white field is a symbol of the will of the people to fight and sacrifice themselves for the freedom of the country.

The flag was used in French West Africa, ie when the country was colonized by the French. It was drafted and adopted on November 23, 1959, a year before Niger’s independence. The flag, their national coat of arms, the national anthem and their electoral language, Fraternité, Travail, Progrés (brotherhood, work, progress) together constitute an official symbol of the nation of the Republic of Niger.

The majority of the country is very low lying 350 meters above sea level. The northern part is covered with desert and the southern one is savannah. There are deposits of uranium, iron, tin and possibly oil. 80% of the country’s population lives in rural areas. In the central parts, the nomadic culture is widespread, and in the south peanuts, rice and cotton are grown. 85% of the country’s energy needs are covered by wood. The land is characterized by the constant spread of the desert and at the same time considerable erosion is taking place as a result of heavy winds. Air and water pollution occur primarily in the larger urban settlements.

Authoritarian regime, supported by France and the United States, using the country as a hub for its war in the Sahel.

The people: The country’s central area is predominantly inhabited by Berber people such as Tuaregs, peules, tubats and fulanis. The southern regions are inhabited by West African peoples such as Hausas, Dermas (Zarmas), Songais and Kamuris.

Political Parties: The National Movement for the Development Society (MNSD) is a government party. The Social and Democratic Convention (CDS). Nigerian Party for Democracy and Socialism. The Alliance for Democracy and Progress (AFC) is an alliance of 9 opposition parties.

Government: Mahamadou Issoufou has been the country’s president since April 2011, re-elected in 2016. Brigi Rafini, prime minister since April 2011. Parliament has 171 members.