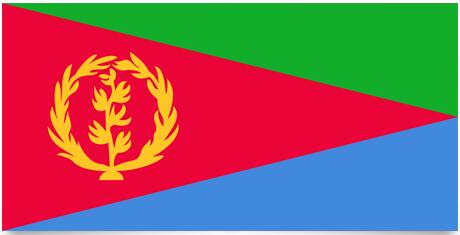 The appearance of the flag is based on the flag used by the liberation movement EPLF, which instead of a wreath with an olive branch had a yellow star in the red triangle. The flag was adopted on December 5, 1995.

The red triangle represents the blood shed for the sake of freedom and independence, the green is a symbol of prosperity, progress and development in the country and the blue refers to all the riches of the sea. The wreath and olive leaf are a symbol of peace and Eritrean autonomy and originate from the flag that the country used when they formed a federation with Ethiopia in the years 1952 – 1962.

Eritrea is located on the “Horn of Africa”. Its 1000 km coastline borders the northeast to the Red Sea, to Sudan in the west and north, to Ethiopia to the south and to Djibouti in the southeast. The dry and extremely hot highland is inhabited by nomads. Deforestation and widespread erosion are partly to blame for the repeated drought periods.

The People: Despite the Semitic lineage, the Eritreans maintain that they are Arabs; they are therefore recognized by the Arab League as a member state. The population is made up of 9 ethnic groups: tigrinians, tigers, cars, afars, saho’s, nara’s, hidareb’s, rashaid’s and kunama’s. The majority are cattle herders or farmers; Almost 16.3% of the population work in the cities. 500,000 Eritreans live as refugees in Sudan, 40,000 in Europe and 14,000 in the United States.

Political parties: The only party recognized by the government is the People’s Front for Democracy and Justice – the former rebel movement, the EPLF. As Illegal Organizations Exist: The Front to Liberate Eritrea and Islamic Jihad.