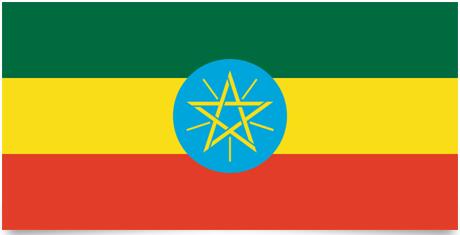 During the 20th century, the flag of Ethiopia became a symbol of all the African countries that were slowly but surely liberated from colonization. Red, yellow and green but sometimes also black are called the pan-African colors, these colors most African countries now had in their flags. In 1895, the colors were used for the first time by Emperor Menelik II, in three separate pennants, a flag of the three colors composed was first hoisted on October 6, 1897. The

flag was adopted on February 6, 1996. Many Ethiopians do not want to recognize the current flag with the blue circle and a yellow pentagram, using the old flag instead.

Mountainous land without access to the sea. The mountains up to 4,000 meters in height cut off the land from its neighboring countries. The highlands are about 2,500 meters above sea level and are called Dega. In the cool and rainy climate, cereals are grown and kept cattle. The deep valleys between the plains are called Kolla. The climate is warm and rainy and the vegetation is characterized by forest. The plains at 1500-2500 meters are less rainy and a little cooler. It is on these that most of the country’s population lives. Among other things, coffee and cotton. To the east lies the desert plain Ogaden, populated by nomads of Somali descent. Many regions that previously had considerable vegetation have now turned into desert and cliffs. The soil erosion and the transformation into the desert has taken place over the past 10 years.

Authoritarian regime. The state suppresses freedom of speech and severely restricts the freedom of independent media, the opposition and human rights organizations. Criticism is generally not tolerated at any level. Authorities imprison both actual and suspected oppositionists. Peaceful demonstrations are being attacked by security forces. Arbitrary arrests and detention are widespread, as are torture and ill-treatment in the custody of the authorities. Population displacement is widespread across the country. The country is globally at the bottom of international summaries of respect for human rights. Ethiopia is a strategic ally of the United States in the “fight against terrorism” and receives up to $ 1 billion annually. US $ in aid of the superpower.

The People: Ethiopians consist of more than 90 ethnic groups, of which only 7 consist of more than 1 million people. The Oromo people make up about one third of the population, the Amhara people approx. one fourth and the tiger one tenth. They are followed by the Guragi people, the Somalis, the Sidamans and the Wolaites.

Religion: Among the Amhara and Tigers, the Ethiopian Orthodox Church is dominant (40-50% belong to this faith). The majority of Somalis, Afars and Aderas are Muslims. Furthermore, the traditional African religions are widespread.

Language: Amhari (officially) spoken by the Amhara people. In addition, there are 3 major language tribes: Kuchita (spoken by the Oromo, Somali and Afar people); Omotic and nil-saharui.

Political Parties: The Ethiopian People’s Revolutionary Democratic Front is a coalition comprised of a number of parties: the Liberation Front of Tigray; Oromo’s Liberation Front; Democratic Union of Southern Ethiopia; Democratic Movement of the Ethiopian People. Other parties with parliamentary representation: the Amara people’s organization; Ogaden’s National Liberation Movement. A large number of smaller organizations existed after the fall of the Mengistu regime. Most with an ethnic basis and many Islamic oriented.

Administrative division: 9 regions as well as the cities of Addis Ababa and Dire Dawa

National Day: May 28 (Victory of the Mengistu Dictatorship, 1991)