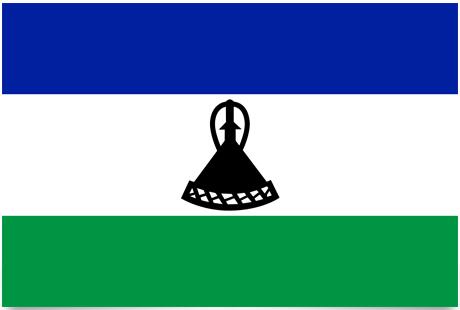 The flag was adopted on October 4, 2006, in connection with the celebration as an independent state for 40 years. The white color stands for peace, the green stands for the prosperity of the country and the blue is a symbol of what they call pula, the rain, which is crucial for all forms of life in their arid climate. In the middle of the flag you see the image of a traditional headdress, markorotlo, from the Basotho people. This headdress, which is made of straw, has been part of the national costume since the early 20th century, but was spread during the Second World War. In the 1950s, political leaders used the hat as a marker of belonging to traditional tribal and village hierarchies.

This small country lies in the suburbs of the Drakensberg Mountains in South Africa. The land is without coasts, mountainous and only in the western part of the country has lands suitable for agricultural production (maize and wheat). The rest of the country is used for sheep breeding. Apart from small deposits of diamonds, the country does not have mineral resources. The most serious environmental problem is soil erosion. The shortage of water will be further exacerbated when a projected hydroelectric power plant in the Highlands begins redirecting water resources to South Africa.

The people: The country is predominantly (85%) inhabited by the Basotho or Sotho people who have Bantu origin. The Zulus make up 15% of the population, and there is also a small Asian and European minority.

Religion: Predominantly Christian (93%), of which 42.8% are Catholics, 29.1% Protestants and 21.1% belong to other Christian faiths. Furthermore, 7% of the population practices traditional African religions.

Government: Parliamentary Monarchy. King Letsie III has been the country’s head of state since November 1990 (except for a period in 1995-96). Tom Thabane has been Prime Minister since June 2017. Two Chamber Parliament: The National Assembly with 120 seats and the Senate with 33.