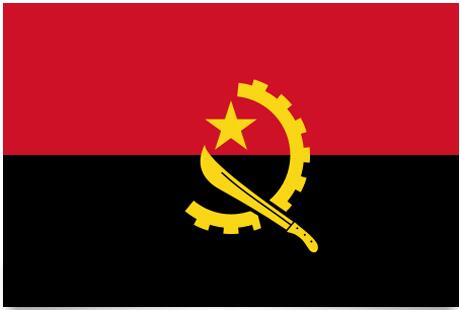 The flag of Angola consists of two fields in red and black with a yellow emblem in the middle, with a gear, a star and a machete. The flag was adopted at independence on 11 November 1975. The upper red half symbolizes the struggle for freedom. The black lower half is reminiscent of solidarity with the African continent. The machete and gear on the flag represent the industrial industry and agriculture. The machete and gear also connect to the communist hammer and sickle.

In the 16th century, Angola became a Portuguese colony. Angola then used the same flag as Portugal. The Angolan liberation movement MPLA (port. Movimento Popular de Libertacao de Angola) used a flag reminiscent of today’s flag, but it had a star in the middle instead of the gear and the machete. In 1975, when the new national flag was created, the gear and machete were added to connect to the socialist hammer and sickle. The flag was established together with the other national symbols in the new constitution adopted on 25 August 1992.

The coastal plain to the Atlantic Ocean is about 150km wide and is fertile and dry. The interior of the country consists of vast plains covered by tropical rainforest in the north, savannahs in the middle and dry steppes in the south. In the areas with the highest population density – in the north and the west central part – mixed subsistence farming is practiced. Coffee is the country’s most important export item and is grown in the north; The sisal is grown on the Benguela and Huambo highlighters; Sugarcane and oil palms are grown in the coastal area. There are a number of important natural resources: diamonds in Luanda, oil in Cabinda and Luanda, iron in Cassinga and Cassala. The port of Lobito is connected by rail to the mining centers of the Democratic Republic of Congo and Zambia.

The country is plagued by a number of environmental problems that have been exacerbated by the civil war. In general, there is a shortage of water. In 1987, the water shortage, among other things, caused a cholera epidemic in Luanda. Furthermore, erosion and deforestation occur as a result of the export of rare woods.

The people: Because of. century slave trade, population density is low compared to the extent of the country: 8.5 residents/km 2. Mhp. To preserve its rule, the Portuguese colonial government stimulated tribal conflicts and divisions between the various ethnic groups: Bakondo (13% of the population), kimbundu (25%), ovimbundu (37%) and others (22%). Europeans and their descendants make up 1% and mixed groups 2%.

Religion: The majority worship traditional African religions, ca. 38% are Catholics and 15% are Protestants.

Languages: Portuguese (official) and African languages ​​of Bantu origin: ovimbundu, kimbundu and kikongo. There are 41 different languages ​​spoken in the country.

Political parties: The Popular Movement for the Liberation of Angola (Movimiento Popular para la Liberación de Angola – MPLA), founded by Agostinho Neto in 1956. The National Liberation Front of Angola (Frente Nacional de Liberación de Angola – FNLA). The main force in the opposition is the National Union of Angola’s Total Independence (Unión Nacional por la Independencia Total de Angola – UNITA). This organization has 40,000 men under arms and started war again after losing the elections in September 1992. In 1991, a number of new parties were formed that could change the political landscape.

Government: João Manuel Gonçalves Lourenço has been President since September 2017. Legislatively, these are one-chamber systems with a National Assembly of 220 members elected by direct election.

Economy: Angola is by nature one of the richest countries in Africa. The land is fertile and agriculture varied. Angola is believed to be as rich in minerals as South Africa. Already in 1955 oil was found near Luanda, but the largest finds so far were made by Gulf Oil off the coast of Cabinda in 1966. Angola also has large diamond stocks as well as iron ore, copper, bauxite, manganese, phosphate, platinum, uranium and a number of others. strategically important minerals that are still only partially mapped and poorly utilized. Portugal enacted in 1935 a law prohibiting other countries from investing in its colonies, but from the mid-1960s, due to the increasingly costly colonial wars, the country had to open the borders to foreign capital. This led to rapid growth in Angola’s gross domestic product, but not to improvements for the population. From about 1965, the wealth of Angola became the area of ​​interest of the Western powers, with Portugal as the formal proprietor and agent of classical imperialism with looting of raw materials. A number of major companies had – and have continued to some extent – interests in Angola: North American, South African, French, British, West German and Belgian. These economic interests were the direct cause of the strong Western interference on the part of FNLA and UNITA during the “Second War of Liberation,” as MPLA calls it. With its socialist ideology, the MPLA was considered less cooperative with the foreign multinational corporations.