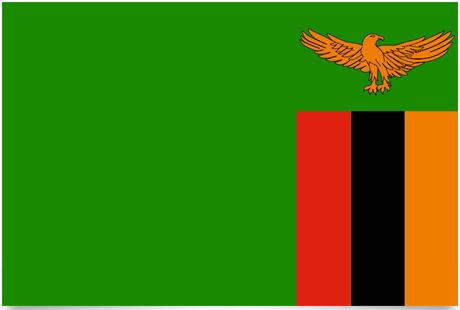 The flag was officially raised in 1964. The colors are taken from the Independence Party United National Independence Party flag. The eagle, which is also found in the country’s arms, symbolizes freedom, but was already found in the country’s arms during the colonial era. The green color represents agriculture, the orange country’s wealth of copper. Black stands for the people, red symbolizes the struggle for freedom.

The majority of the country consists of a plateau extending from the gorges towards Malawi to the swampy areas at the border with Angola. The Zambesi River runs to the south, and at Kariba there is a large dam and hydroelectric power plant across the river. The climate is tropical but moderate due to the altitude. The country’s mineral resources – especially copper – are the basis of the economy.

Mining has had a negative impact on the environment. Erosion and decreased fertility are linked to the excessive use of fertilizers. Slums constitute 45% of the capital, Lusaka, and there are serious sanitary problems: lack of drinking water and lack of medical care. These circumstances contributed to the cholera epidemics in 1990-91. Wildlife is endangered due to poaching and lack of resources to preserve the protected areas.

The people: Zambians (98%) are descended from several immigrant waves of Bantu people, and are subdivided into 73 ethnic groups. There are small minorities of Europeans (70,000) and Asians (15,000).

Language: English (official). Among the Bantu languages, 5 are officially recognized. They are used in teaching and administration: nyanja, bemba, lozi, luvale and tonga.

Political parties: The United National Independence Party (UNIP), until 1991, was the country’s only. This year elections and Movement were held for Multiparty Democracy (MMD) to get 81% of the vote and 125 of Parliament’s 150 seats, while UNIP got the last 25th United Party for National Development (UPND); Democracy and Development Forum (FDD); Heritage Party (HP).

Social Organizations: Zambia’s Trade Union Congress consists of 16 unions; The Workers’ Union has recently been formed and has 2 million members.

Government: Edgar Lungu has been President since January 2015. Parliament (National Assembly) has one chamber with 159 members. They are elected for a 5 year term.