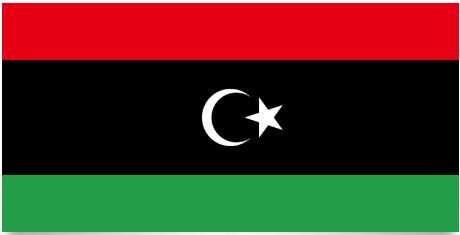 The flag has the pan-Arabic colors, and the classic symbol of Islam with the crescent moon and the star. The symbol placed on the black field is taken from the flag of the Emirate of Cyrenaica.

In 1951, when Libya became independent from Italy, a flag with the pan-Arabic colors was adopted. When the monarchy was abolished after a coup in 1969, a red, white and black flag was adopted. After having a common flag with Egypt and Syria, when they joined the federation with each other, a completely new flag was introduced which was solid green when they left the cooperation in 1977. The green flag was a symbol of Muhammar al-Gaddafi and their current flag is the flag his opponent had. The flag was adopted in 2011.

Most of Libya is covered in desert. The sparse fertile soils are located in the coastal area facing the Mediterranean, where the climate is temperate and where the majority of the population lives. There are no permanent rivers and the rain is sparse and irregular. On the other hand, the country has significant oil deposits. Drinking water is sparse and most of it must be pumped up from underground sources. Pollution takes place in the air ifbm. refining the oil. Furthermore, desertification is still spreading and erosion is increasing.

The People: In 1995, the Arab Berber Libyans made up 79% of the population. Furthermore, there are minorities of Egyptians, Sudanese and Chad people.

Religion: Islam (official) of the Sunni direction. There is a small Christian minority.

Government: NATO with Britain and France in the lead in March to October 2011 attack war on Libya. On October 20, 2011, the country’s former leader, Muammar Gaddafi, was executed. The country is ruled by various clans and their militias. The 3 main centers of power are Misrata, Benghazi and Tripoli. There is no functioning central government. In Tobruk there is an exile government and a Chamber of Deputies recognized by several Western countries. In Tripoli sits a rival National Congress.

National Day: The country no longer has a common national day.

Armed Forces: Libya no longer has a united national army following the popular uprising in 2011.

Paramilitary forces: Several hundred tribal-based militias with an unknown number of men under arms. IS has gained a foothold in the eastern part of the country and has over 6,000 fighters under arms.