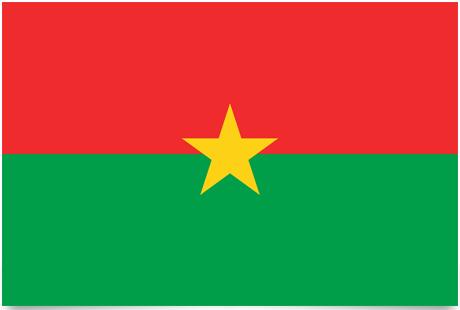 Since August 4, 1984, the flag has used the pan-African colors, where green stands for the natural riches of the country and red symbolizes their revolution. When the country became independent in 1960, then called the Upper Volta, the flag had the colors black, white and red in three horizontal fields. These fields symbolized the largest tributaries to the Volta River.

The Pan-African colors originally come from Ethiopia. Other African countries have seen Ethiopia as a role model as it was the only country that managed to avoid colonization or in any other way become dependent on a European state.

Among the most densely populated nations in the Sahel Sea, in southern Sahara. The Volta Noire, Volta Blanche and Volta Rouge rivers flow from the Mossi High plateau, which consists of fertile soil that is unfortunately plagued by tsé-tséflies. Like most others in the Sahel region, the country suffers from the desertification caused by non-adaptive technology, mainly related to peanut and cotton cultivation. One of the most serious consequences for the population is the lack of firewood. The air pollution in the major cities, caused by the use of fossil fuels and industrial emissions, represents the biggest environmental problem.

The people: The Mossis make up more than half of the total population, while the cattle herdsmen the Pouhi along with the tamajaks and their “vassals”, the bellahs, represent approx. 20%. The peasant and trade people the djuls are a minority group among the indigenous population. The senufo and bobo finger culture is found on the steppes in the west, where the savannah goes into jungle. The Lebi, bobo owl, guruni and bisa cultures dominate the areas of the south. The Gurmantehé culture belongs in the East, while the Sampo, Rurumba and Marko cultures are in the desert areas of the North and Northeast.

Language: French is the official language; There are 71 languages ​​of the Sudanese family spoken by 90% of the population. The most widely used languages ​​are mossi, bobo and gurma.

Government: President since December 2015: Roch Marc Christian Kaboré. Prime Minister since January 2016: Paul Kaba Thieba. Two-Chamber System: The National Assembly with 127 members elected by direct election for a 7-year term; the House of Representatives with 178 members. Justice: The judges are responsible to the Supreme Council, which is under the President.

Armed forces: 8,700, including the Gendarmerie.