Where is Burkina Faso located on the map? Burkina Faso is an independent nation located in Western Africa. Check out the following images to see location of Burkina Faso on maps. 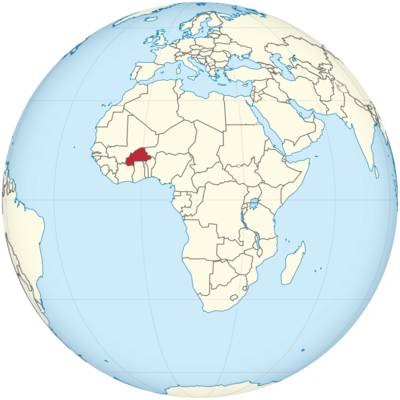 Burkina Faso is a country in West Africa. It has no access to the sea, so it is an inland area. It borders Mali to the north, Niger to the east and Benin, Togo, Ghana and the Ivory Coast to the south.

Until 1984 the country was called Upper Volta. This is what the French colonial power called it after the river Volta. That was not changed with independence in 1960. It was not renamed until 1984 in the course of a revolution. Burkina Faso is Mooré, the language of the Mossi, who make up the largest proportion of the country’s population. It literally means “fatherland of honorable people”.

hree rivers have their source in Burkina Faso and then flow together to form the Volta in Ghana. They are called Mohoun (Black Volta), Nakambé (White Volta) and Nazinon (Red Volta). In the slideshow below, you’ll find a map that shows you this well. There are other smaller rivers in the country, for example tributaries of the Niger, which originate in Burkina Faso and then flow into the Niger River in Niger, for example the Béli or the Sirba.

There are also lakes. The largest are the Bamsee and the Demsee. Both are located in the north of the country and are threatened with drying out because the desert is spreading ever further. This means that the livelihoods of the people who live here will also disappear, because they can no longer irrigate their fields and also no longer catch fish.

There are also some reservoirs. The rivers have been dammed here. They are used to supply water and generate electricity. There is even a sandy beach at the Bagré reservoir.

The southern half of Burkina Faso is in the tropics. The climate here is tropical and humid. All year round it is about the same warm, namely an average of 25 to 30 degrees. There is a rainy season. It lasts from May to September. Most of the rain falls in August. In the rest of the year there is almost no rain. The desert wind, Harmattan, blows in December and January. He brings red sand and dust from the desert, which covers everything.

Towards the north the country is getting drier. The landscape is a dry savanna. The northernmost part belongs to the even drier Sahel zone.