Tunisia, state of North Africa; 164,000 km2, 11.6 million residents (2019).Tunisia borders in the west to Algeria and in the southeast to Libya and has the north and east coast to the Mediterranean. The capital is Tunis.

The eastern foothills of the Atlas Mountains in northern Tunisia form a wooded mountain landscape. On the plateau there are two important rivers that flow into the Gulf of Tunis, al-Majrada and Miliane, which are used for irrigation. The southernmost part of Tunisia is mainly occupied by the sand desert in the west and the rock desert in the east, except along the coast to the southeast where there is a wide coastal plain. The country has a warm temperate climate of the Mediterranean type, which turns south into the steppe and desert climate.

According to the constitution adopted in 2014, the legislative power is exercised by Parliament, which is elected every five years. The President and Government, led by the Prime Minister, share the highest executive power. Presidential elections are held every five years. Tunisia became independent from France in 1956. In 2011, a popular revolution was implemented in the country. This inspired several similar revolts in Egypt, Yemen, Libya and Syria.

The country has a mixed economy with both public and private companies. Business is based on oil and phosphate extraction, textile industry and tourism. During the 1990s, Tunisia implemented sweeping reforms such as the privatization of state-owned enterprises and major investments in education and development projects, which had a positive effect. The country has managed to broaden its economic base; the manufacturing industry and the service sector, especially tourism, have become more economically important. 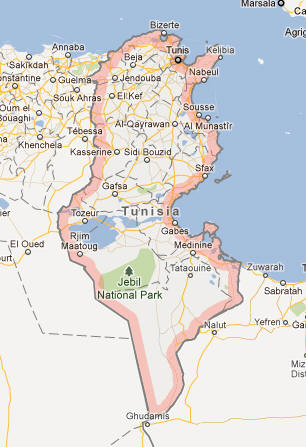