Tunis is the capital and largest city of Tunisia, and is located northeast of the country near the Mediterranean at the Gulf of Tunis. The city has 767,000 residents, while the metropolitan area has a population of about 2.4 million (2010).

Tunis is Tunisia’s administrative center, as well as the main hub for politics, economy, culture and education. It has significant tourism and is Tunisia’s most important trade and industrial center. Tunisia’s main port city of La Goulette is located on the Bay of Tunis, 15 kilometers east of the capital.

Tunis is the largest commercial and industrial center in the country, and the city is the headquarters of a number of banks and financial institutions.

The Tunis industry is mainly textile production; clothes and blankets. There is also a substantial food industry in the city, and large quantities of olive oil are produced. The city has an extensive mechanical, metallurgical and chemical industries. In addition, there are several cement factories in Tunis, and electrical equipment and railway parts are being produced to a greater extent. The city has its own phosphate treatment plant.

In recent years, the service industry has become increasingly important in the capital’s economy, which is primarily due to a significant growth in tourism. The city has two universities; the oldest was founded in 1960.

Tunis is the country’s most important traffic hub, and the road and rail links to the rest of Tunisia are well developed. The internal traffic system in the capital includes a modern metro, as well as city buses.

The port of Tunis (La Goulette) is 15 km east of the city and is the country’s most important – both in terms of freight and passenger traffic.

Tunis is served by two airports. The largest is Tunis-Carthage International Airport, located 9 km northeast of the city center.

Tunis can roughly be divided into three areas: the old town (the medina), the new town (now the center) as well as the newer districts south and north of the center.

The historic center of Tunis, the so-called medina, is well preserved and is one of North Africa’s largest. It was built during the Aghlabid dynasty in the 8th and 9th centuries. The medina is surrounded by city walls and is a busy business and residential area with narrow, crooked streets and alleys. There are bazaars and markets, as well as a number of historical mosques, mausoleums, churches, palaces, fountains and monuments.

Also in this area is Tunisia National Library, as well as several museums – including the Museum of Islamic Art. The medina architecture is otherwise known for its distinctive city gates and decorated doors, and the medina has been listed on UNESCO’s World Heritage list since 1979.

A famous landmark in the old town is the Zitouna Mosque from the year 698 according to our times. This is both the oldest and the largest mosque in the capital. To the west of the medina is the Rue de la Kasbah street with the government administration and several ministry buildings.

The new town of Tunis (French: Ville Nouvelle) lies east of the medina and dates from the French occupation period (1881 – 1956). This is the center of the capital, and the area consists of wide avenues and regular quarters. The main main street in Tunis city center is Avenue Habib Bourguiba, and in this area lies the only Catholic cathedral in Tunisia, St. Vincent de Paul Cathedral from 1897.

Just outside the center of Tunis you will find the Bardo Museum, which is known for its extensive collection of Roman mosaics. The capital also has a National History Museum, a zoo and an art museum. At Lake Tunis lies Belvedere Park, the city’s largest.

19 kilometers northeast of the center of Tunis lies the ruins of the ancient city of Carthage, which is listed on UNESCO’s World Heritage List. Also linked to the same area is the coastal village of Sidi Bou Said. The coastal town is famous for its architecture with old restored palaces, as well as whitewashed houses with blue painted doors and windows.

The original Phoenician settlement of Tunes was relatively unimportant during Carthage’s prosperity and under Roman and Byzantine rule. Only in the 8th century did the Arab rulers move the capital there from Kairouan. After Sicily was conquered in 827, Tunisia was for nearly 250 years one kingdom with this island, and Tunis was developed into a significant port city. In the 13th century, it must have had over 100,000 residents and even been larger than Cairo. 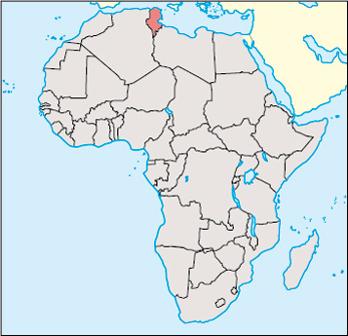