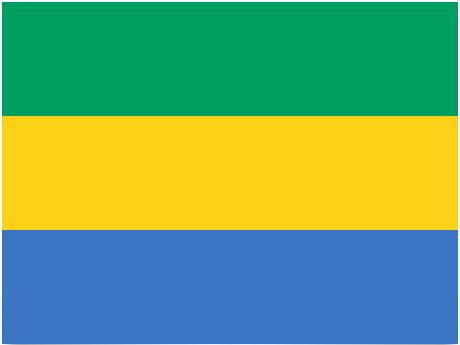 The flag of the country of Gabon has three ribbons on the horizontal in three different colors. From top to bottom it is green, yellow and blue. The flag has looked like this since the ninth of August in 1960, about 53 years ago. The blue color represents the Atlantic, the yellow color is a symbol of the sun and the green color represents the forest.

The year before the flag was adopted, another, similar flag was adopted in Gabon. It also had green, blue and yellow ribbons. However, the bands were then in different sizes, and in the inner upper corner you could find the French flag.

Located at the mouth of the Ogooué River. The country has tropical climate with rain throughout the year. The rainforest is therefore very dense. A significant proportion of the population is employed in the timber industry (especially the felling of the okoumé tree) as well as in the extraction of the country’s raw materials – manganese, oil, uranium and iron. The deforestation of the country’s trees is one of the most serious environmental problems, along with the extinction of wildlife.

The people: The country was originally sparsely populated by pygmy hunters, but took from the 16th century a significant immigration of Bantu people who spoke the language Mye. They were later followed by other people. Today, about half of the population consists of bantu, divided into 40 ethnic groups. galosas, nkomies and irungus. About a third of the population belongs to the fang and kwele people – predominantly in the northern part of the country – and in the south there are minorities of punus and nzabis.

Religion: The majority are Christians, which allowed the colonizers to call the country the “bastion of the cross in Africa”. More than a third practice traditional African natural religions and there is also a small Muslim minority.

Language: French (official). The Bantu languages ​​are dominant in the coastal areas, catch in the north and in addition a number of minority languages.

Government: Parliamentary Republic with a strong head of state. Member of the African Financial Community (CFA). Ali Bongo Ondimba has been President and Head of State since October 2009; re-elected in 2016. Emmanuel Issoze-Ngondet has been Prime Minister and Head of Government since September 2016. Parliament has two chambers: the National Assembly with 120 members elected for a 5-year term and the Senate with 91 members.