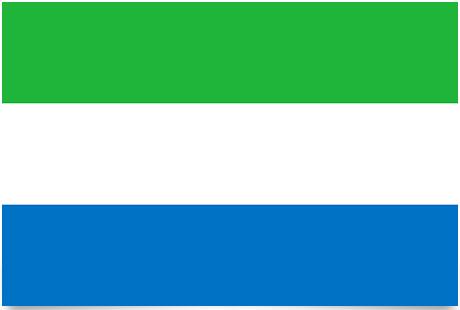 Green stands for agriculture and the country’s mountains and all natural resources. Blue stands for the sea and the port of Freetown, white is a symbol of the electoral language of the country; unity and justice. The colors are also found in the country’s coat of arms. Both the flag and the coat of arms were co-designed by the British Heraldry College.

The flag was adopted in connection with their independence on April 27, 1961 from Great Britain. Their war flag originates from the British way of designing war flags with the national flag in the canton, ie. at the top of the innermost corner, occupying about a quarter of the size of the flag. The background of the war flag is white.

The country can be divided into three regions: the coastline is a few hundred kilometers wide, it is flat and it also includes the island of Sherbro; The tropical rainforest in the central parts of the country has been largely felled to give way to agriculture; On the eastern plateau there are deposits of diamonds. Forests are extensive and the consequence is that 85% of natural habitats have been lost.

The people: Time and mind the people make up about a third of the population. Other important groups include: lokkos, sherbos, limbas, sussus, fulahs, konos and krios. The latter are descendants of freed 19th-century African slaves who settled in Freetown. Krio is a distortion of the English “creole”. Furthermore, there are small groups of Europeans, Arabs, Chinese and Indians.

Religion: The majority worship traditional African religions. About a third are Muslims (concentrated in the north). The Catholic minority lives in the capital.

Language: English (official). The majority of the population speak Creole. A local dialect with elements of European, Temne, incoming and other African languages.

Political parties: the All Peoples Congress (APC) established in 1960 has the support of incoming people, and are mostly concentrated in the south. Sierra Leone Popular Party (undertaking SLPP) has its base in Temne people in the north. Sierra Leone Democratic Party. In 1991, these two parties formed the United Front of Political Movements, which also attracted smaller groups. Revolutionary United Front (RUF) wages armed struggle against the government.

Government: Ernest Bai Koroma was elected President in November 2007, re-elected in 2012. Parliament has one chamber: House of Representatives with 124 seats.