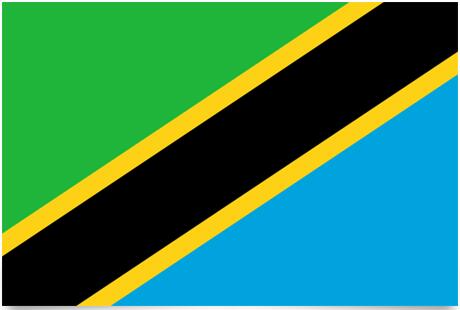 The flag of Tanzania was adopted on June 30, 1964 with the proportions 2: 3. The flag is blue and green with a delimiting black field that runs diagonally from the lower left corner to the upper right corner. The black field is also separated from the other fields by a yellow stripe on each side. The creation of the flag was when Tanganyika and Zanzibar were united and part of a union.

The country consists of the ancient land of Tanganyika as well as the islands of Zanzibar, Pemba and Mafia. The islands are of coral origin. On the mainland, the landscape and climate are varied. The coastal area facing the Indian Ocean is flat and its climate is tropical and rainy. The majority of the population is concentrated at the same time. Further to the west lies the central plateau where the climate is dry and plagued by tsetse fly. The northern part of the country is mountainous, but the slopes are suitable for farming. It is also in this area that Africa’s largest mountain, Kilimanjaro (6,000 m) is found. The area around Lake Victoria is densely populated and irrigation is used in agriculture. Along the coast there are large sisal and sugar cane plantations. The need to increase exports leads to an increase in agricultural production, even in semi-arid areas. This has led to increasing soil erosion. At the same time, the untamed deforestation continues.

The people: The Tanzanians have predominantly Bantu background, and are divided into 120 ethnic subgroups. In the western part of mainland Tanzania there are also nilocamitic groups. In Zanzibar, there is the minority Shivazi, of Persian origin. In both places there are groups of Arabs, Indians, Pakistanis and Europeans.

Religion: Islam (35%), traditional cults (35%) and Christianity. In Zanzibar, 99% of the population is Muslim.

Languages: Swahili and English (official) as well as about 100 local languages

Political parties: Tanzania Revolutionary Party (CCM, Chama Cha Mapinduzi), socialist, formed February 5, 1977 by the merger of the Tanganyika African National Union (TANU) founded by Julius K. Nyerere in 1954 and the Afro-Shirazi Party of Zanzibar. In 1992, multi-party rule was allowed. Today, there exist, among other things. the following parties: the Democracy and Progress Party (CHADEMA); The Civil United Front (CUF); National Convention for Building and Reform (NCCR-Mageuzi); The Movement for Democratic Alternative (MDA) on Zanzibar.