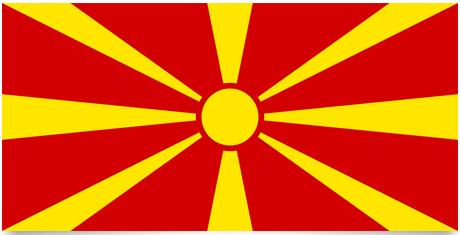 The sun on the flag should represent the “new sun of freedom”, which is also found in Macedonia’s national anthem. After the country gained its independence from Yugoslavia, a flag with a yellow star with 16 rays was introduced. The symbol also appears far back in history on Hellenistic shields and coins in excavations from ancient Macedonia, created by Philip II.

According to the Greeks, ancient Macedonia is the forerunner of modern Greece and therefore the Greeks have seen the star as a symbol of its belonging. As a result, a conflict arose which led to a Greek embargo on Macedonia. Finally, the two countries agreed, and on October 5, 1995, Macedonia changed its flag to the new sun of freedom.

Macedonia is located in the southern Balkans without access to the sea. To the north, the country is adjacent to Serbia and Kosova, to the east to Bulgaria, to the south to Greece and to the west to Albania. Two mountain systems intersect the region: Pindo which is an extension of the Alps and Ródope in the central and eastern part of the country. The climate is continental. In the capital, the average temperature in winter is 1ºC and in summer 24ºC. The Vardar valley is the country’s most important agricultural area, and sheep and goats are raised in the mountain areas. There are some deposits of copper, iron and lead in the underground.

Government: Gjorge Ivanov has been the country’s president since May 2009; Zoran Zaev has been prime minister since May 2017. Parliament has one Chamber (Sobranie) with 120 members elected for a four-year term.