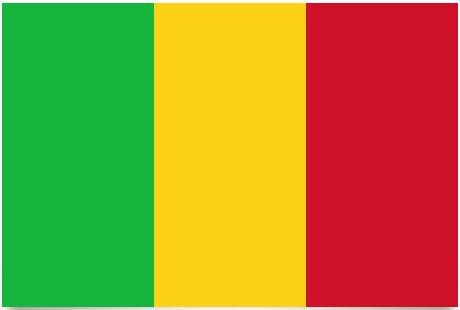 The flag of Mali is inspired by the flag of Ghana. The colors red, white, yellow and red symbolize nature, wealth and previous generations’ sacrifices for independence. The design with the three vertical fields reflects the flag of France, which was previously a colonial power.

Mali can be divided into three regions. The northernmost desert-like part is part of the Sahara. The central part, called the Sahel savanna, is in the process of being turned into desert. The southern part has moist savanna vegetation, irrigated by the Senegal and Niger rivers and the most densely populated. The lack of water and the deforestation caused by sweat use increase the drought problem.

The People: Among the many ethnic groups in Mali is the most numerous bambara. Among other important ethnic groups we find Malinke, Songhai, Senufu, Fulanis, Dogon and Tuareg.

Language: French is the official language. Bambara is spoken by 80% and is the most widely used African language. Arabic and Tuareg are also spoken.

Government: Ibrahim Boubacar Keïta has been the country’s president since September 2013. Abdoulaye Idrissa Maïga has been Prime Minister since April 2017. The legislation is based on a one-chamber national assembly with 129 members elected for a five-year term.