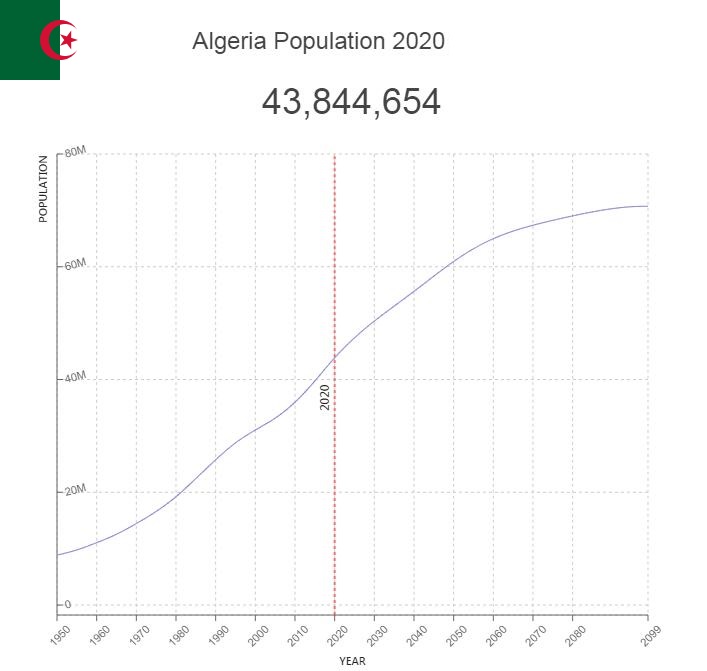 Algeria is Africa’s largest country and an important oil and gas exporter. The society is characterized by a bloody civil war in the 1990s and an authoritarian ruling party that has ruled since the country became independent from France in 1962.

The population of Algeria is estimated at 38,934,334 in (World Bank 2014) (16 residents per km2), with an annual growth of 2%. The proportion of young people is very high; 28% are under 14 years. However, fertility has been declining and currently stands at 2.78 children per woman (CIA World Fact Book 2015). Life expectancy at birth is estimated to be 69 years for men and 73 years for women.

About 70% of the population are Arabs and approximately 30% are berber. Most Berbers live in the highlands southeast of Algiers and in Ahaggar (nomadic Tuaregs). The European population, which before 1962 numbered over 1 million, has largely left the country. Millions of Algerians live abroad as foreign workers and refugees, most in France.

The bloody conflict that has characterized Algeria since the 1990s, including Attacks, terror and oppression have made everyday life difficult for the population, not least this applies to women, who are under intense pressure from fundamentalist groups to coordinate. “Modern” women who wear Western clothing, seek education, work and express their own opinions are particularly at risk. Although the perpetration of violence has slowed somewhat compared to the mid-1990s, a number of political killings have also occurred in the first part of the 2000s. The projected killings since the Civil War began to vary between 100,000 and 150,000.

The settlement is very unevenly distributed. About 95% of the population resides in the northernmost 10-12% of the area. In the Sahara, only the oases are inhabited. The social differences between the cities and the countryside are large, and diseases caused by poor sanitary conditions and lack of clean water are widespread. The influx of cities is very large, causing both economic and social problems. The largest cities are the capital Alger, Oran and Constantine. A total of 65% of the population lives in cities (2007).

Population of Algeria by Year (Historical)

Major Cities in Algeria by Population

Algeria was Islamized in the 600s. About 99% of the population are Sunni Muslims; small Ibadite groups live in M’zab in the south. There are also some small Catholic churches.

After the liberation from French colonial rule in 1962, Islam became a state religion. In 1984, the role of Islam was strengthened by the majority of the Conservative wing of the FLN (Front de Libération Nationale) gaining a majority to introduce Islamic family law. After political unrest in 1988, fundamentalist groups and parties marked themselves as important parts of the opposition. Since 1991, the country has experienced civil war-like conditions in which extremist groups have played a prominent role.

The official language is Arabic(standard or scriptural Arabic). Dialectal variants of Arabic are native languages ​​for approximately 80% of the population, while approximately 20% speak different Berber languages ​​(Tamazight), the most important of which is Kabylian, with over 2.5 million users. A limited urban elite has French as daily speech. French is also an important secondary language, and has long been completely dominant in education, administration and business. Since its liberation, an active Arab policy of education and administration has been pursued, but French remains central to business, higher education, the media and modern cultural life. Among educated people, French – or a mixture of Arabic and French – constitutes a significant part of the linguistic repertoire. Over the past couple of decades, the Berber minority has increasingly demanded an official berber berth in Algerian society. A law introduced in 1998 that banned the use of anything other than Arabic in the public sphere has provoked violent reactions, and since 1999 the authorities have shown a growing tolerance for Berber in school and administration in Berber areas. In 2004, Berber gained official language status.