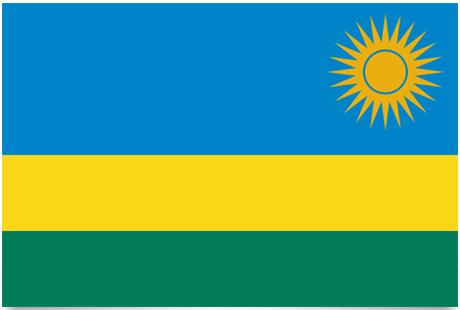 Green is a symbol of the hope of prosperity, the power of the people and natural resources. The yellow field stands for economic development in the country and the work for progress. Blue is to achieve happiness through peace. The sun, which has a different shade of yellow than in the yellow field, is a symbol of light that must exist to illuminate the people. The light is also a symbol of unity, honesty and the fight against ignorance.

The country has been both a German colony, a Belgian colony and later a UN mandate area under Belgium. When Rwanda became independent, the country was divided into two states, Rwanda and Burundi. The flag was adopted on December 31, 2001.

Rwanda is located in central Africa and is known as the 1000 hills country due to its position between 2 mountain ranges. The landscape is characterized by a mountainous terrain, a myriad of rivers, lakes and a rich fauna. The population is concentrated in the highlands where subsistence farming is practiced. The low lying areas are characterized by overgrazing, which has caused loss of natural vegetation and erosion. 90% of the country’s energy consumption is covered by wood, which has led to deforestation and erosion.

The people: Rwanda’s population is formed through repeated immigrations that have superimposed the indigenous population. Currently, it consists of 84% de hutus, 15% watusis (tutsis) and 1% twas – pygmies. There is a small minority of Europeans, most of whom are of Belgian descent.

Religion: There is no official religion. The majority of the population (69%) practice traditional African religions, 20% are Catholics, 10% are Protestants and 1% are Muslims.

Government: Paul Kagame has been president since April 2000. He was re-elected in 2003, 10 and 17. Édouard Ngirente has been Prime Minister since August 2017. Two-chamber system: The Senate has 26 members and the National Assembly 53 members.