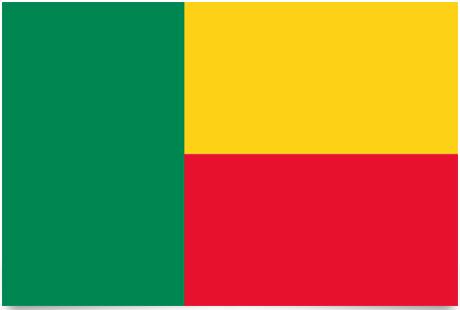 The flag of Benin was originally adopted on November 16, 1959 and consists of three rectangular fields, two lying in the colors red and yellow at the outer part of the flag and a standing green field at the inner edge. The colors of the flag are the traditional Pan-African, symbolizing African unity. The red color symbolizes courage, the yellow wealth and green symbolize hope.

In 1975, the flag was replaced when the country also changed its name to Dahomey, it was on August 1, 1990 that the original flag was taken back and the country returned to its former name in connection with the overthrow of its Marxist regime. The flag has the proportions 2: 3.

Benin, a narrow strip of land that raises and expands to the north, has a sandy coastline of 120 km without natural ports. From the south to the north, the country consists of various natural areas: the coastal belt where palms are cultivated; the highland rainforests; the high plains that rise slightly to the rivers Ouermé, Mekrou, Alibori and Pendjaris in the hilly, tropical region. Among the most serious environmental problems is the fact that desert areas increase due to the lack of rain in recent years. The almost non-existent sanitary conditions cannot supply the population with drinking water and diseases caused by contaminated water endanger 65% of the population, especially in agricultural areas.

The People: The people of Benin have their roots in 60 different ethnic groups. By far the largest groups are the fonts with 47%, the Adja, Yoruba and Baribi, who had developed stable political structures even before the French colonization.

Religion: 70% of the population practices traditional African religions; 15% are Muslims and 15% are Catholics.

Language: French is the official language. The most widely used languages ​​are fon, fulani, mine, yoruba and massi.

Government: Republic led by a President with great powers. Patrice Talon, President, Head of State and Government since April 2016. One-room system with 83 members.

Paramilitary forces: The Gendarmerie and the People’s Militia: 4,000 men.