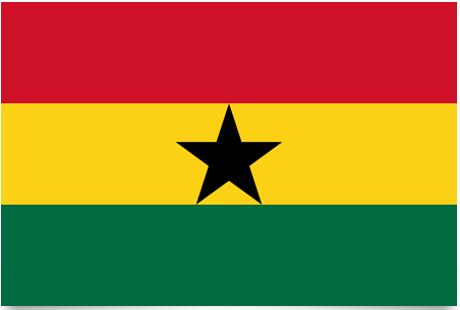 The Ghanaian flag has four different colors in the form of three horizontal bands, or lines, in red, yellow and green from above. In the middle of the flag is a black star. The first time the flag was adopted by Ghana was on March 6, 1957. The different colors of the flag symbolize and stand for several different things. The red color symbolizes the blood sacrificed in the country’s struggle for independence, the yellow color represents the finds the country has made in mines, and the green color represents, as it does in the flags of many other African countries, the forests. The black star stands for Africa as a free continent.

The land is covered by dense rainforest that has been cleared in some places to accommodate cocoa, coffee, banana and palm oil plantations. In the northern part of the country the vegetation is savanna. The rest of the country is flat with some ridges towards the border with Togo. The country’s most important river is Volta, which expands into an artificial lake at the Akossombo Dam. The climate is tropical with rain in the summer. The subsoil is rich in gold, diamonds, manganese and bauxite. In the northwestern corner of the country, the desert is spreading, and further south the land is plagued by deforestation.

The People: The Ghanaians belong to 7 different ethnic groups: the Ashantis and the fantasies, 44%, live in the central and southern part of the country; the ewes (13%) and ga-adangbe (8%), live in the south and southeast on both sides of the Volta River; the mole day bans (16%), live on the savannah to the north; guan (4%) and gurmas (3%) live in the valleys and highlands to the northeast.

Political parties: The Progressive Alliance is a coalition of the Democratic National Congress, the National Convention and the Party of All Ghanaians in the World (EGLE), which supported Jerry Rawlings in the 1992 presidential election. The National National Convention is the overthrow of President Limann’s party and (theoretically) the heir to the country’s first president – N’Krumahs – ideas. The National Independent Party. The New Patriotic Party.

Social organizations: About 50 unions are gathered in the single organization Ghana’s Trade Union Congress. The women’s movement on December 31 is the female branch of the so-called ’31. December Revolution »and led by Nna Konadu Agyeman Rawlings, married to President Jerry Rawlings.

Government: Nana Addo Dankwa Akufo-Addo, President, Head of State and Government since January 2017. The House has one chamber with 275 members elected by direct election for a four-year term. The current constitution was adopted on April 28, 1992.