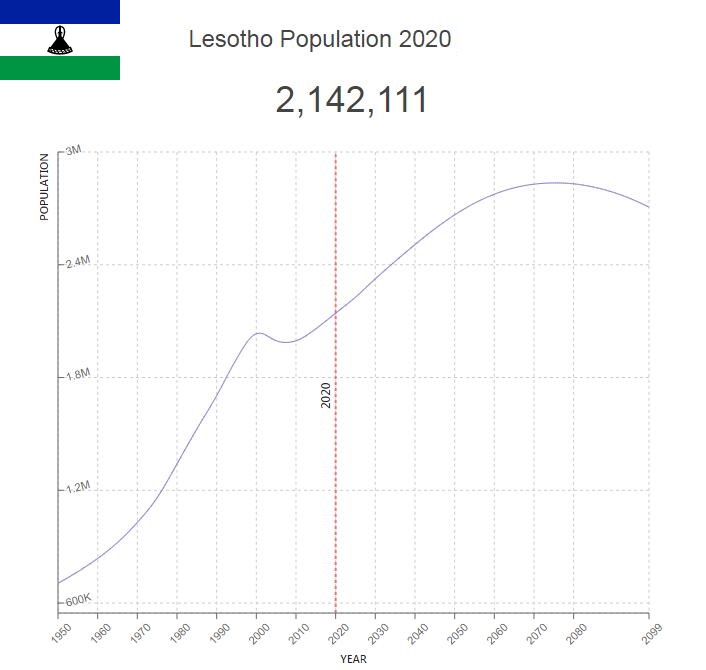 Lesotho is a small mountain country in South Africa that has been populated for over 50,000 years. The country is one of the world’s poorest, but has large water resources.

The population of Lesotho in 2013 was estimated at 2,024,000 residents (World Bank). Annual population growth is estimated at 1.1% and life expectancy is 49 years for women (down from 63) and 48.6 for men (down from 58). The frequency of births is reduced somewhat by the large number of male workers residing in South Africa. According to the World Bank, an estimated 23.1% of the adult population lives with HIV/AIDS.

The population belongs almost entirely to the Sotho (Basotho), which is a Bantu speaking people.

Around 70% live in small villages on the narrow strips of lower lands below the mountains, but overpopulation forces many to ascend the plateaus or to seek employment in South Africa. 29% live in the city, but the urban population increases by 3.6% annually. Only major city is the capital Maseru.

Population of Lesotho by Year (Historical)

Major Cities in Lesotho by Population

Official languages ​​are English and the Bantu language Sotho (Sesotho), which is also the mother tongue of the majority of the population. The Zulu bantu language is also used.

Just over 70% of the population is Christian; most Catholics (35%). 35% belong to various Protestant churches, the largest of which is Lesotho evangelical church, while 13% belong to native churches. The others are supporters of various local religions.