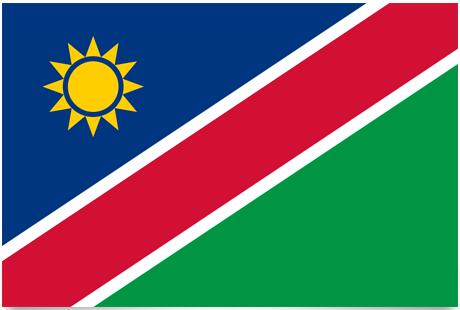 Red stands for the country’s population, their heroism and the determination that there will be equal opportunities for all in the future. White is a symbol of unity and peace, green is the country’s variability, blue stands for the Atlantic, the rain and the sky and last but not least the golden sun which stands for all life and energy.

Blue, red and green are traditional colors for Ovambo, Namibia’s largest ethnic group. The flag was adopted on March 21, 1990. It got its design through a competition held throughout the country, 835 proposals came in as proposals for their new national flag before their independence.

The land is predominantly flat and is in a desert area that is characteristic of Capricorn’s Turning Circle. The Namib Desert out to sea would have been completely depopulated had it not been for significant diamond deposits to be mined. To the east lies the Kalahari Desert which extends further into Botswana. In fact, it is more of a steppe, as it receives some rain. It is populated by shepherds and hunters. However, the population is predominantly concentrated in the north and in the central highlands, which receive the most rainfall. The fishing along the coast is extensive and together with cattle farming was the economic basis until the mining breakthrough in the 1960s. The country has important reserves of copper, lead, zinc, cadmium and uranium.

Religion: No official religion exists. The majority cultivate traditional African religions, which does not, however, prevent 51.2% from declaring themselves to Lutherans, 19.8% to Catholics and 5% to Anglicans.

Government: Hage Geingob has been President since March 2015. Saara Kuugongelwa has been prime minister since March 2015. The Constitution establishes Namibia as a multi-party presidential government. The National Assembly is elected every 5 years and has 96 seats.