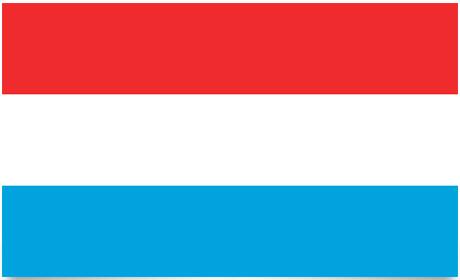 The colors red, white and blue are derived from the coat of arms of Grand Duke Henry IV, which in the 13th century was a red lion with a golden crown against blue and white stripes. The flag was used as a symbol of the French Revolution’s ideal of freedom since the 1840s. It was officially adopted as the national flag of Luxembourg on June 23, 1972. The flag differs from the flag of the Netherlands with its slightly paler blue color and in shape it is a little more elongated.

The design of the trade flag has even more similarities with Henry IV’s coat of arms. It has narrow blue and white stripes, with the red lion also found on Luxembourg’s coat of arms.

Luxemburg is located in the southwest of the Ardennes mountain range in Western Europe and consists of two geographical regions. The northern part of the country consists of valleys and forests, is sparsely populated and the height does not exceed 500 m. In this area potatoes and cereals are grown. In the southern area – Gutland – most of the population lives, and this is also where the country’s most important industrial centers are located.

Government: Constitutional monarchy and parliamentary system. Grand Duke Henri has been head of state since October 2000. Xavier Bettel has been prime minister and head of government since December 2013. Parliament – the Chamber of Deputies – has 60 members elected every 5 years.