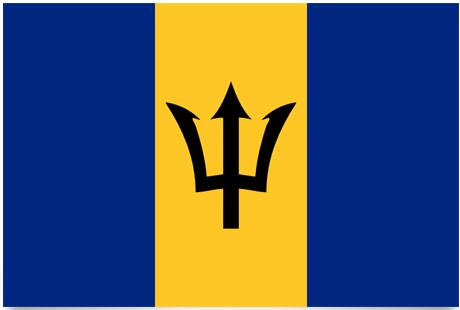 The flag of Barbados consists of three vertical bands, two of which are blue and one is gold. In the middle of the flag is the top of a black trident. The blue stripes on the flag represent the sea and the gold colored ones represent the beaches. Treudden is the coat of arms of the sea god Neptune, and was used during the country’s colonial era both in the flag and in the island’s coat of arms and on their coins.

As a consequence of the country’s independence on November 30, 1966, the trident was replaced with only the upper part of the weapon, which symbolizes independence and a break with the past. The flag is one of the 1029 entries submitted as a proposal for the national flag and was made by the drawing teacher Grantley Prescod.

Barbados is of volcanic origin and is the easternmost of the Caribbean islands and is part of the archipelago of the Little Antilles. The lush soil and the rainy, tropical climate enable the cultivation of sugar cane grown in crop rotation with other crops such as cotton and maize. The island’s most serious environmental problems are waste water, garbage and soil erosion both inland and in the coastal areas, as well as water consumption. At the local level, pollution and intensive use of the seas are also major problems.

The people: The majority are of African origin, 92.5%. There is a European minority group, 3.2%, and the mestizer constitutes 2.8%. Barbados is one of the world’s most densely populated areas with an average of 616 residents per capita. km 2.

Religion: There is no official religion. 33% of the population is Anglican; 29.8% are Protestants; 4.4% are Catholics.

Languages: English, the official language, as well as Creole

Government: Freundel Stuart has been prime minister since October 2010, elected in 2013. Philip Greaves has been governor since July 2017. Constitutional monarchy with a two-chamber system consisting of the 21-member Senate and the 30-member Legislative Assembly.