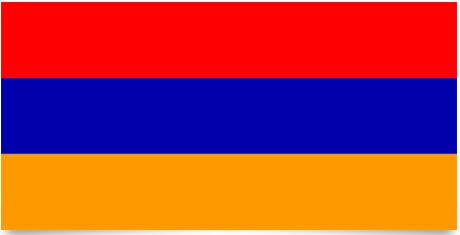 The flag of Armenia consists of three horizontal bands of the colors orange, blue and red and was adopted in its current form on August 24, 1990. This was the day after the declaration of independence from the Soviet Union . The proportions of the flag are 1: 2, i.e. the flag is twice as wide as high.

The Armenian flag was added during the country’s earlier independence in 1918-1921, and is based on an earlier flag created at the Armenian Institute in Venice in 1885. There are many explanations for what the colors symbolize, but the most accepted is that red stands for the blood they spilled when they defended his country, blue for the sky and orange for the good soil of the country.

Armenia is a mountainous nation bordering Georgia in the north, Azerbaijan in the east and Turkey and Iran in the south. With an average height of 1,800 meters, Armenian nature is quite varied: the high mountain peaks of the Caucasus, such as. Aragat at 4,095 meters, and the volcanic lowlands, intersected by deep valleys with rivers. The largest of these rivers, the Araxe, is a tributary of Koura, forming the natural boundary of Turkey and Iran. Armenia has a mainland climate, very dry; the summers are very hot and the winters correspondingly cold. In the plains, wheat and grain, cotton, tobacco, sugar beet and wine are grown, while cattle breeding is mainly carried out in the mountains. The subsoil is rich in copper, aluminum and molybdenum. The country faces a number of environmental problems: contaminating the soil with highly chemical products such as DDT; overproduction of electricity with negative consequences for Lake Sevan; the Medzynor nuclear power plant is located in an earthquake zone.

Religion: The majority professes to the Orthodox Christianity of the Armenian Church.

Language: The official language is Armenian. In addition, Russian, Azeri and Kurdish are spoken.

Political parties: The current government coalition consists of the Republican Party of Armenia and the People’s Party. Also available are: the Communist Party; The Party of Law and Unity; Armenian Revolutionary Federation (Dashnaktsutiun Party, Social Democratic); and a large number of small parties: the Armenian National Movement, the Shamiram Women’s Movement, the Armenian Democratic Party and others.

Government: Serzh Sargsyan, President since April 2008, re-elected in 2013. Karen Karapetyan, Prime Minister since September 2016. Parliament has one Chamber, the National Assembly with 131 members

Paramilitary forces: 1,000 men, under the Ministry of the Interior.