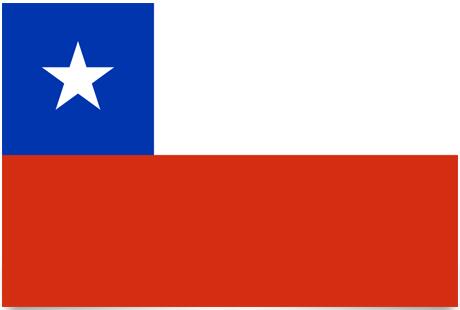 The flag was adopted on October 18, 1817. The red in the flag stands for the blood spilled to achieve independence, the blue is a symbol of the sky and the Pacific Ocean and the star stands for the future and unity.

The flag was created in the early 19th century during the Chilean freedom struggle. During the country’s first independent period between 1810 – 1814 and from 1812 a tricolor was used in the colors blue, white and red. Chile again became a Spanish colony in 1814, but broke free and became independent in 1817. The old Chilean flag, from their first period of independence, was then abolished too much like the Dutch flag.

Chile is sandwiched between the Andean chain in the east and the Pacific in the west. Its widest location is 402 km, while from north to south it is 3,500 km long. It is this length in particular that explains the great variation in climate and landscape. Due. the cold ocean current in the Pacific Ocean is the northern part of the desert desert, and that is where the most important copper and salt terminals are found. The central region is temperate, suitable for agriculture, and 65% of the population is concentrated. The southern part of the country is cooler and covered with forests. During the military dictatorship, 40,000 hectares of indigenous forest were felled annually, which meant the eradication of the local fauna. The air pollution in the capital Santiago, several times a year, exceeds the level of what is harmful to human health.

The People: The Chilean people are predominantly the mestizer. A result of the mix of the indigenous population and European immigrants. There are also Mapuche communities with a total population of approx. 300,000.

Languages: Spanish (official), mapudungun (the language of the Mapuches), rapa nui and a number of other minority languages.

Government: Sebastián Piñera, President since March 2018. Two-chamber system with 43 senators and 155 deputies. Parliament is not in Santiago but in Valparaíso.