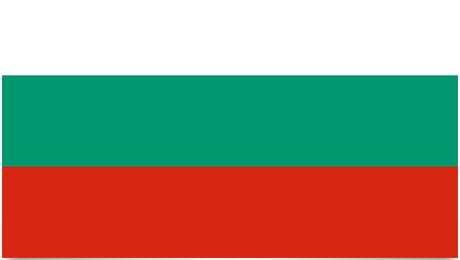 The white in the Bulgarian flag stands for peace, the green symbolizes their fertile soil and the red field shows the courage of the people.

A Bulgarian revolutionary used a flag with the colors white, green and red as early as the 1860s when Bulgaria was under the Ottoman Empire and Bulgarian-Russian troops used it during the Russo-Turkish War 1877 – 1878 ie a flag in the same colors, a lion and also the text ?? Bulgaria ??. The flag became a model for a united and independent Bulgaria and became the national flag on April 16, 1879. Between 1947 and 1990, the image of the coat of arms was on the flag, towards its inner edge. In 1990, when the communist regime fell, the old flag was reintroduced.

Bulgaria, located on the Balkan Peninsula, consists of four natural areas: In the north lies the Danube plain, with fertile soils where wheat and maize are grown. In the southern part of the plain, the Balkan mountains rise; a ridge covered with forests where grain and potatoes are grown and cattle and sheep are raised. It also contains the most important deposits of iron, zinc and copper. South of the Balkan Mountains there is an area of ​​plains where the Maritza River flows; tobacco, cotton, rice and flowers are grown here. The Ródop Mountains in the south are a cattle area. Heavy metals, nitrates, waste products from oil and fertilizers damage the environment and help to lower the water level in the major rivers. The rivers have their outlet in the Black Sea, which is heavily polluted. A quarter of the country’s forests are damaged by air pollution.

The people: The majority of the population is of Slavic origin, 85%. There are also descendants of Turks, 9.4% and Gypsies, 3.6%. Smaller minority groups of Macedonians, Armenians, Tartars, Caucasians and Russians.

Language: Bulgarian is the official and most widely used language; In addition, Romani, Greek, Turkish and Armenian are spoken.

Political parties: the Union of Democratic Forces, a coalition of 7 parties; Democratic Left consisting of the Bulgarian Socialist Party, the Environment Party and the Peasant Union; National Movement Simeon II; Union for National Salvation; The Movement for Freedom and Human Rights (for the Turkish minority); Euro-Left coalition; Bulgaria Trade Block; Communist Party; The Union of Monarchy. Parties with an ethnic character are prohibited.

Social Organizations: The Association of Bulgaria’s Independent Trade Unions was formed in 1990 and is the country’s largest trade union with 1.6 million. members. Since 1990, the Workers’ Union Podkrepa also exists with Constantin Trenchev as chairman. The farmers are gathered in Bulgaria’s National Agricultural Union, and the farm workers are gathered in the national trade union Nikola Petkov. Furthermore, there are a wide range of regional, ethnic and national groups with different agendas. One of the most active is the internal revolutionary Organization of Macedonia.

Government: Rumen Radev, President since January 2017. Boyko Borisov, Prime Minister since November 2014. One-chamber system; The National Assembly with 240 deputies is the supreme authority. It appoints a Council of State, consisting of 27 members, whose president is the head of state. The Council of Ministers, headed by the Prime Minister, is accountable to the President.