Where is Zambia located on the map? Zambia is an independent nation located in Eastern Africa. Check out the following images to see location of Zambia on maps. 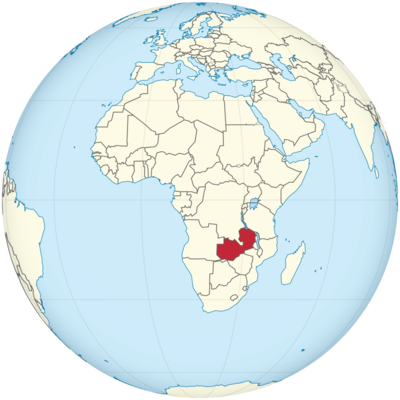 Zambia is located in southern Africa. Around 14.5 million people live in an area of ​​752,614 square kilometers. Zambia is about twice the size of Germany. From east to west it extends over 1,350 kilometers and from north to south over 1,100 kilometers.

Zambia is in the south of Africa. Here you can see the outline of Zambia and the neighboring countries.

The country derives its name from the Zambezi River, the fourth longest river in Africa. It flows in the south of the country. Zambia is a landlocked country because the country does not border the sea. Zambia also builds a bridge between eastern and southern Africa.

At the transition from the northern to the central part there is a deep cut, here the area of ​​the Democratic Republic of the Congo extends far into the interior of Zambia, which you can see very well on the map. It looks like a little corner. The so-called copper belt also runs along this, a region in which copper was found and is still mined today. The most important cities in the country can also be found here. Zambia is divided into a northern and a southern part of the country.

Zambia is divided into a total of nine provinces:

A large part of Zambia consists of a plateau. The country is between 1000 and 1400 meters high. This plateau is surrounded by deep valleys. The highest mountain is in the east of the country in the Mafinga Mountains. Savannah landscapes alternate with tropical forest landscapes, which makes Zambia interesting and varied in terms of landscape.

Zambia is very rich in water, rivers and lakes shape the landscape. Zambia has many waterfalls due to the rugged slopes of the mountains. The most famous are the Victoria Falls of the Zambezi River. These have been declared a World Heritage Site by UNESCO. They were discovered by David Livingstone, who named the falls in honor of the then British Queen Victoria Victoria Falls.