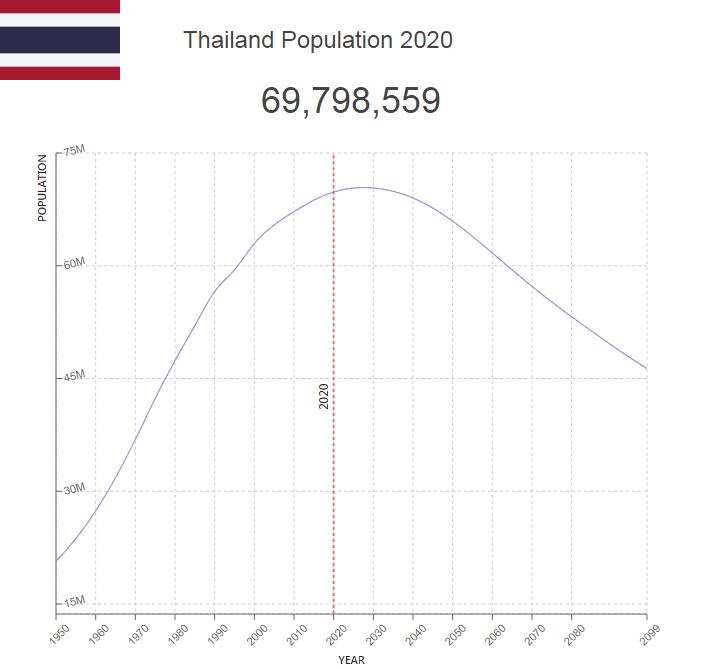 The Buddhist monarchy Thailand quickly moved from being an agricultural country to an industrialized country after World War II. Politics is turbulent, and in 2014 the military conducted a nineteenth coup since the monarchy was abolished in 1932. 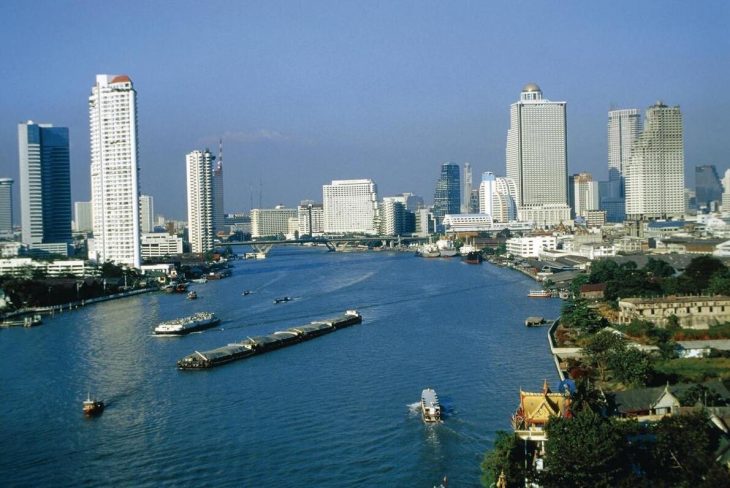 Life expectancy at birth is 78 for women and 71 for men.

Population of Thailand by Year (Historical)

Major Cities in Thailand by Population

The majority of the population, about 75 percent, are ethnic Thai who can be divided into several regional groups, each with their own distinctive character. The groups all speak their own variants of the Thai language, but they share a common written language and religion (Theravada Buddhism). The Thai people in the northeast speak Lao, like half the Laos population. Both the northeastern region and the language are referred to as Isaan. Archaeologists, linguists and historians disagree about the origins of the Thai people; whether they have lived in the area for thousands of years, or whether they have immigrated from Indonesia or from southern China.

The largest minority are Chinese, which make up about 14 percent of the population. Most Chinese reside in cities, especially in Bangkok, and they dominate in trade and finance. The Chinese in Thailand have not been persecuted by the authorities to the same degree as in other countries in the region. Among the reasons for this is that they have adapted to the local culture through the Thai language, they have adopted Buddhism, and very many have married into the local population.

Other minority groups include Muslim Malays in the south and Khmer, mon and a number of smaller ethnic groups in the mountainous regions in the west and north. Large streams of refugees have fled in times of crisis from neighboring countries, especially from Myanmar and Cambodia. The authorities have pursued an active policy to limit the flow of refugees, and in some cases have also pushed the refugees back to their homelands.

Often the terms ‘thai’ and ‘tai’ are used to distinguish between the population of Thailand as a whole and the ethnic Thai people. According to this definition, ‘thai’ encompasses all population groups residing in Thailand, while ‘tai’ (or ‘t’ai’) includes ethnic thai who, in addition to Thailand, also reside in Myanmar, Laos, Vietnam, China and India.

In 2014, the population density was 132 residents per square kilometer. Besides the Bangkok region, the Central region had the highest population density. The thinnest areas are in the west and farthest in the north. Although many move to the cities, a large proportion of the population lives in the countryside. Figures for urbanization are uncertain due to unclear boundaries and large groups of migrant workers, but was estimated by the World Bank in 2014 to be 49 percent. Bangkok is the dominant urban area with 8.5 million residents (World Population Review 2014).

The official language is Thai. It is the mother tongue for over 90 percent of the population. The largest language minority are the Chinese-speaking, further found in southern Malay – and towards the border with the Cambodian Khmer- speaking.

More than 90 percent of the population are Buddhists (theravada school). Monasteries and temples play a very important role in people’s daily lives. Most boys live for a time as monks. Muslims make up about 5 percent. Other religious groups are Christians, Hindus and Sikhs. The different tribes have their respective religions, or have become Buddhists or Christians. A small but important religious group (about 4000 families) are the original Indian Brahmins, who perform rituals associated with the royal house and are renowned astrologers.