Where is Thailand located on the map? Thailand is an independent nation located in Southeastern Asia. Check out the following images to see location of Thailand on maps. 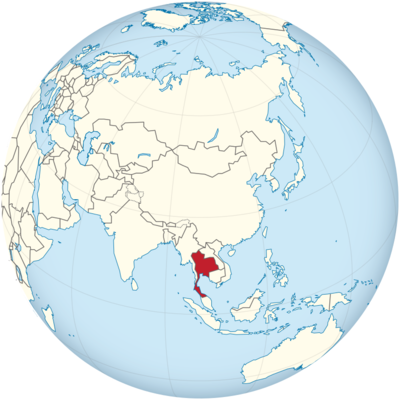 Thailand is located in Southeast Asia on the Gulf of Thailand. Myanmar (Burma) is to the west and Cambodia to the east. It borders Malaysia in the south and Laos in the northeast. With its 513,115 square kilometers, Thailand is around one and a half times the size of Germany.

If you look at Thailand on the map, the shape of the country is a bit reminiscent of an elephant’s head.

The north of Thailand

Thailand is really big! Accordingly, you will also find a wide variety of landscapes. In the north of Thailand it is very green, full of forests and rivers. Above all, there are mountains here, because the foothills of the huge Himalayan mountains reach into Thailand. In the north-west of the country is also the highest mountain in the country, Doi Inthanon with a height of 2565 meters.

The northeast of Thailand

In the northeast is the Isan region. It borders Cambodia and Laos. Thailand is not only geographically close to these states there, also a lot of the cultures of these countries spilled over. Together with these cultures, this part of Thailand developed its own dialect, which differs from the common Thai. He is also called Isan.

The Isan lies on a plateau, the Khorat plateau. Tourists rarely visit this region because there are no beaches there. From a cultural point of view there is a lot to discover in the northeast. The salt and sand deposits on the land, which are also common in Laos, are also typical.

In the middle of Thailand, especially the tourists feel right at home, because there is a bit of everything in terms of landscape. On the one hand there are mountains that stretch from the north to the middle of the country, on the other hand there are the breathtaking white beaches that are often associated with Thailand. Bangkok is also included in this region. There are even more beaches the further south you go. Many islands are also part of the national territory of Thailand.

The landscape of Thailand is very varied. Many rivers cross the country and most of the people live on these rivers because the rivers wash up fertile mud and the soil here is ideal for agriculture. There are also mountains, plateaus and beautiful beaches in Thailand.

Thailand has a tropical climate. In the north of the country you can distinguish three seasons, from cool to hot to very hot. In the south, however, the temperatures remain largely the same. The north is much drier than the south.

The monsoons have a major impact on the Thai climate . The southwest monsoon blows between May and October. It brings rain all over the country. The northwest monsoon, on the other hand, blows from October and February. It brings drought to the north, but rain to the south.

Like many other large cities, Bangkok has to contend with pollution. There are a lot of cars and the environmental regulations are nowhere near as strict as ours.

Many rivers are also polluted because the dirt and waste just get into the sewer system without cleaning. Bangkok is traversed by many canals, which today – if they are not filled in – are usually completely polluted.

When the industry grows, so does the waste problem. Some of the city’s garbage dumps extend into the residential areas, where mostly poorer people live.

Above all in Bangkok, waste is produced without end. Poison often gets into the groundwater and then again contaminates the fields that are irrigated with the poisoned water.