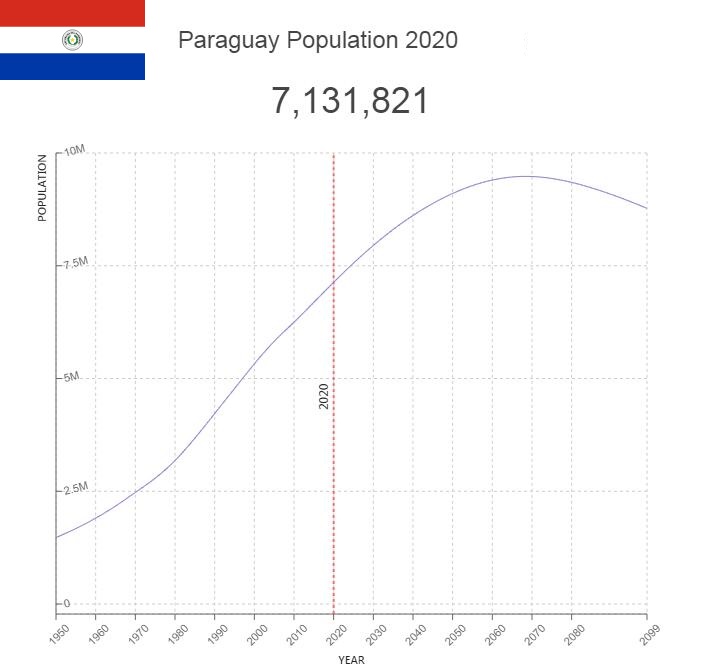 Paraguay was an oppressive and brutal dictatorship until 1989. Since the introduction of democracy, the country has been characterized by corruption, and major social and economic inequalities between the poor and the rich.

The indigenous people of Paraguay were dominated by the numerous Guarani people. 95% of the population is of mixed Spanish and Guarani descent (traditionally this has been called mastiser). About 2% belong to Native American people other than Guarani. The rest of the population belongs to immigrant groups that have settled in Paraguay during the 20th century, including Europeans (mainly German Mennonites), Japanese, South Koreans and people from the Middle East.

Population density is low, 16.25 per km2 in 2010 according to figures from the World Bank, and the settlement pattern is very uneven. Most live in the Oriental region of the country, near the capital Asuncion which is the largest city in the country. The Occidental region, which accounts for 60% of the territory, is home to less than 2% of the population.

From a historical perspective, Paraguay has had the lowest urbanization rate among Latin American countries. It was not until the census of 1992 that for the first time more people lived in cities than in the countryside. As of 2010, just under 40 percent were still living in rural areas, with around one third of the working population employed in agriculture. It is assumed that between 2010 and 2015 there will be a 2.5% annual migration to cities.

It is estimated that 4% of annual GDP goes to education in Paraguay. 91% of children complete primary school, and 50% continue in high school. A 2003 estimate suggests that 94% of people over the age of 15 at that time could read and write – somewhat fewer women than men.

Paraguay has a good offer in private healthcare, but only a small part of the population can afford to take advantage of this. Since 2008, initial reforms have been seen in Paraguay’s public health system, with the goal of free treatment for all. At the same time, the lack of health services in rural areas poses a serious problem – as does poor infrastructure when needed for urgent medical assistance. Malnutrition and poor sanitary conditions, together with the lack of health care, mean that many diseases that are usually easily treatable can be found in Paraguay – for example various parasitic and respiratory diseases.

Paraguay is one of the poorest countries in South America, and figures from 2012 indicate that 18.8% of the population lives in poverty. Between 2010 and 2011, unemployment in the country averaged 7.2%. Unemployment is generally higher among women than men. For young people between the ages of 15 and 24, unemployment per 2011 was 11.8%. Other major societal challenges are the growing problem of violence, and widespread corruption – the country is considered the most corrupt in South America. On the UN index of human development, Paraguay is ranked 96 out of 169 (figures from 2010).

Population of Paraguay by Year (Historical)

Major Cities in Paraguay by Population

According to figures from 2002, just under 90% of the population is Roman Catholic. The largest group of Protestants in the country are Mennonites. There is also a small but growing group of Muslims in the country.

Both the Spanish and the Native American guaraní are official languages. Most people in Paraguay are therefore bilingual.