Where is Paraguay located on the map? Paraguay is an independent nation located in South America. Check out the following images to see location of Paraguay on maps. 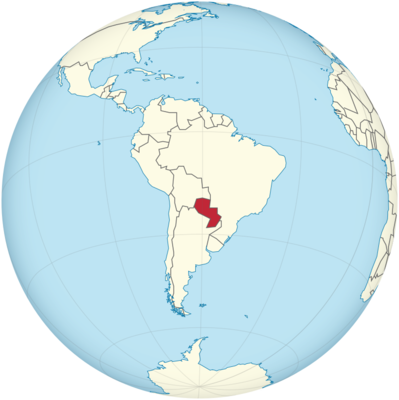 Paraguay is in the middle of South America. The country is located in the southern hemisphere of the earth. Paraguay has no access to the sea. Paraguay borders with Bolivia, Brazil and Argentina. So there are three neighboring countries.

Location of Paraguay in South America

If you look at Paraguay on a map, you can see that it runs from northwest to southeast, so it is “sloping”. On the one hand, the Paraguay River divides the country, and on the other, the Tropic of Capricorn.

The Chaco landscape takes up about 60 percent of the country. Namely the western part of the country and also the northern part. Overall, it’s very dry here. The landscape consists of marshland directly on the river, which then slowly rises to the foot of the Andes. Then it gets drier to the west. Thorn bushes and dry forest grow here. In the eastern Chaco you can certainly do agriculture.

Grassy plains and wooded hills form the landscape in the Orient, also known as the Paraneña region. This area is east of the Paraguay River and further south, namely south of the Tropic of Capricorn.

To the east the land rises gently and more forests grow. The highest mountain in the country, Cerro Peró, is also located here. At 842 meters, however, it is not such a high mountain. This also shows that Paraguay is not very high – very different from neighboring Bolivia, for example.

The country is named after the river of the same name. The word Paraguay comes from the Indian language Guaraní and means “water that goes to the water”. What is meant is that the Paraguay River flows into another river, namely the Río Paraná. This Río Paraná then forms the border with Brazil over 190 kilometers and the border with Argentina over 600 kilometers.

The Paraguay River flows into Paraguay from the north (from Brazil). In Paraguay it divides the country into two very different areas: the sparsely populated Chaco in the west and the Oriente (east). It also flows through the capital Asunción. Immediately afterwards it forms the border between Paraguay and Argentina.

January is the hottest month. So it’s summer in Paraguay. However, one does not actually differentiate between seasons here, but dry and rainy seasons.

Winds have a major influence on the weather: between October and March, warm winds blow from the northeast, from the Amazon basin. On the other hand, cold winds blow from the Andes between May and August. They bring cold temperatures, sometimes up to frost. Because there are no mountains in Paraguay to stop them, they blow with great force and can go up to 160 kilometers per hour.

In the west it is very dry between May and September. The deserts then turn into swamps in January and February because the land cannot absorb the heavy rain so quickly.