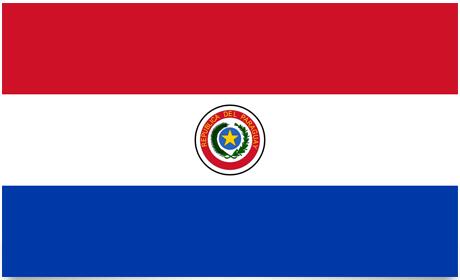 The flag of Paraguay differs from others because it does not have the same emblem on both sides of the flag. On one side is the image of the country’s coat of arms, on others you see the Ministry of Finance’s emblem. José de Francias, the country’s head of government from 1814 to 1842, introduced the idea of ​​different emblems on each side of their previous flag. Then the flag had the coat of arms of Spain on one side and the coat of arms of the capital Asuncion on the other.

On their current flag, on the page where the coat of arms is located, is also the text Paz y Justicia (peace and justice). The flag of Paraguay was adopted on November 25, 1842.

Land without coastline in the Rio de la Plata basin of South America. It is divided by the Paraguay River into two natural regions: the eastern part is the lowlands and receives water from tributaries to the Paraguay and Paraná Rivers. It is covered with rainforest and is also the country’s most important agricultural area. Next to soy which is the country’s most important export product, wheat, corn and tobacco are grown. The western part – the Chaco Boreal – is the driest, the vegetation is savanna, which is grown in cotton and is found in cattle farming. Agricultural production concentrated around the large estates contributes to the clearing of large forest areas, and thus to the destruction of many of the fauna’s habitats. The clearing of forest together with hunting has resulted in 14 mammal species, 11 bird species and 2 reptile species being threatened with extinction.

The People: The Paraguayans are predominantly (90%) mestizos (of mixed origin), with Spanish and Native American ancestry. The latter mainly belonged to the Guarani tribe, which today constitutes only 5% of the population, and have great difficulties in preserving their ethnic identity. Immigration has also created minority groups of Germans, Italians, Argentinians and Brazilians. The latter group plays an increasingly dominant role along the border with Brazil. About 1 million Paraguayans live outside the country. Of these, 200,000 have fled for political reasons.

Languages: Spanish and Guaraní (official). Most Paraguayans are bilingual.

Administrative division: 17 departments and the capital

Government: Presidential Republic of Limited Democracy. The sitting president’s party ousted the elected president by a coup.
Millionaire Horacio Cartes has been president since August 2013. Parliament has two chambers: the Chamber of Deputies (Cámara de Diputados) with 80 seats and the Senate (Cámara de Senadores) with 45 seats.