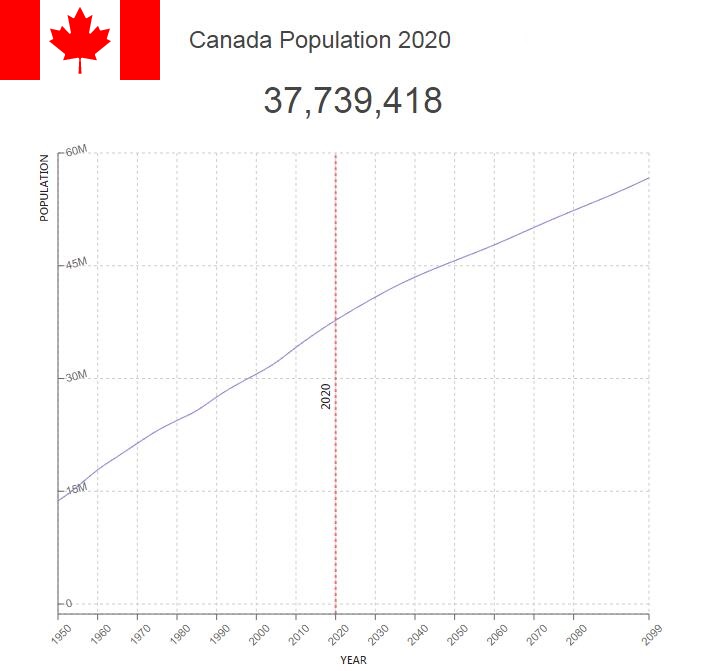 Canada is the world’s second largest land area, and has a large amount of natural resources. Most live near the US border and much of the country consists of uninhabited wilderness areas.

Canada, which has a population of 36.6 million (2017), is a young nation. The country has a cultural mix that is described as a “mosaic”, not “melting pot” like the American one. 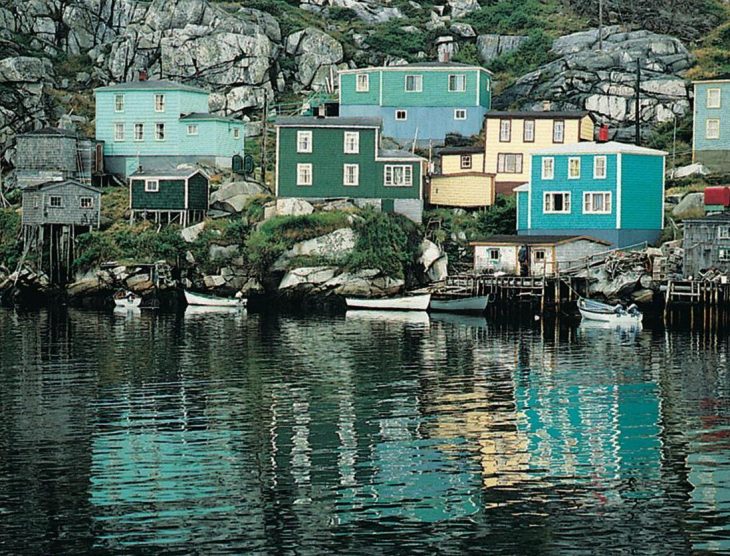 The growth of Canada’s population is complex and has been affected in several ways: through indigenous populations, territorial expansion, and, above all, great openness to immigration. Although population density is low, 3.92 per square kilometer, more regions in the south, such as southern Ontario, have a higher population density than in many European countries.

Population of Canada by Year (Historical)

Major Cities in Canada by Population

In total, over 200 ethnic groups are registered. The ethnic composition is constantly changing through waves of immigration of different ethnicities throughout the 20th century. Social affiliation and identification with one’s own ethnic group have traditionally been strong. However, in the late 1900s, marriage between people of different origins began to become more frequent. At the same time, since 1996, the census shows that more and more of the traditional English- and French-speaking groups are changing to defining their origin as ‘Canadian’.

Especially after 1979, large groups immigrated from the Third World and especially from different parts of Asia. In the period 2006-2010, almost 1.2 million people or 3.8 percent of the population immigrated in 2001. In 2006, 56.9 percent of the immigrants were from Asia, most from the Philippines (13 percent). 20.6 percent of the population (2011) was born outside Canada. This is the second highest percentage in the world after Australia. There are 6.8 million foreign-born residents in Canada (2011).

A newer type of immigration has led to the proportion of so-called “visible minority groups ” (defined as non-white, non-European or not belonging to the indigenous population) to 19 percent of the population (2011). Among other things, the Chinese count 1.3 million people or 4 percent of the population. Most of the “visible minorities” group live in the metropolises Montreal, Toronto and Vancouver, which are among the most cosmopolitan cities in the world.

In bilingual Canada, the French speakers claim to be a “special society”. Their core business is the province of Quebec, where the 4/5 of the population has French as a first language. New Brunswick, where the French-speaking counts 1/3 of the population, is the only province that has both English and French as official languages. French is the official language of Quebec and English in the other provinces and in all territories.

1.4 million people, or 4.3 percent of the country’s residents (2011), identify themselves as indigenous people. Canada has the world’s second highest proportion of indigenous people after New Zealand. They are divided into three main groups: ‘ First Nations ‘ (Indigenous people south of the Arctic Circle, formerly called ‘ Indians ‘ – 851 560 people), Métis (451 795) and Inuit (59 445).

The non-Arctic indigenous people immigrated from Asia once between 15,000 and 40,000 years ago. In the 16th century, the number was about 350,000, but after the introduction of European diseases the number dropped to about 100,000. Around half live in various forms of reserves. Every province has indigenous communities, but most live in a belt from Ontario to British Columbia and north into the Northwest Territories and Yukon. Relatively few indigenous people live in Nunavut.

Métis has ancestry from both indigenous peoples and Europeans dating back to the pre-1800s. An increased focus on constitutional rights has led to a significant increase in the number of people who identify themselves as métis after 1996. Most métis communities are in the provinces of Alberta, Manitoba and Ontario.

Inuit (formerly called Eskimos) immigrated from Asia between 4000 and 8000 years ago. Half of the Canadian Inuit live in Nunavut, 1/5 in Québec and 1/10 respectively in Labrador and the Northwest Territories. In Nunavut, they comprise 84.1 percent of the population (2016). 65-70 percent of Canadian Inuit speak the Inuktitut language regularly. First Nations and Inuit, and to some extent the Métis, have significantly higher birth rates than the rest of the Canadian population. It helps to make their communities very young. Some indigenous communities have an average age of less than 20 years.

Canada never experienced “Indian wars” and massacres following the pattern of the United States. Nevertheless, the indigenous population south of the Arctic Circle was forced to relinquish their traditional ways of life relatively quickly. The Inuit, on the other hand, continued with their traditional ways of living until the 1950s. In time, the indigenous population became more politically active. It has demanded increased political rights, land rights and control over mineral extraction. This political development has taken place with less resistance than, for example, in the United States. Yet it has been hampered by constitutional and political problems.

With the exception of the Vikings around the year 1000, the French were the first Europeans to settle in what is today Canada. The first French arrived in the area at the beginning of the 16th century, but the settlement first started in the 1600s. In 1663, 60,000 French settlers lived in what was then the French province of Canada. These are the ancestors of most of today’s French speakers.

Other immigration first came during the American War of Independence (1775-1783), when about 50,000 English loyalists moved from the United States to Canada (which had been formally renounced to England in 1763). Throughout the 19th century, the population grew due to immigration, high birth rates and low mortality to 3.5 million in 1867, when self-government was granted.

Extensive immigration continued in the late 1800s and up to 1920, and after the Second World War a new wave of immigrants came. The late 1950s and early 1960s had declining immigration before beginning to rise again after 1979.

The population is very unevenly distributed, and for climatic reasons, almost 90 percent live in a relatively narrow belt along the southern border towards the United States. The largest population density is along the Saint Lawrence River and in the lowlands of the Ontario Peninsula (the part of Ontario that lies between Lake Ontario, Lake Erie and Lake Huron with Georgian Bay), with well over half of Canada’s population. The two provinces of Ontario and Quebec have a total of 61.5 percent of the population. To the north are the thinnest areas in the world outside of Antarctica. Yukon, the Northwest Territories and Nunavut, which together cover 41 percent of Canada’s area, have only 0.5 percent of the population. The northern parts of Alberta,Saskatchewan, Manitoba, Ontario, Quebec and all of Labrador are also very sparsely populated.

The trend since the latter part of the 1990s is that population growth is mainly concentrated in four large urban regions. Golden Horseshoe (‘Golden Horseshoes ‘) with Toronto (Ontario) as the center, the Montreal area (Quebec), the Vancouver area and southern Vancouver Vancouver Island (British Columbia) and the so-called Calgary – Edmonton corridor (Alberta).