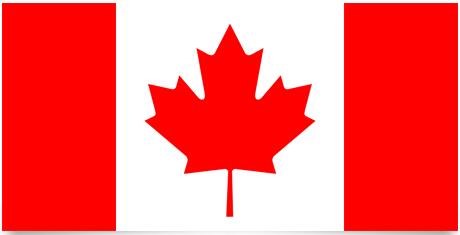 The Canadian flag is red with a white square field in the middle containing a maple leaf with eleven capes.

The colors are taken from the British Union flag and are said to represent the soldiers who fell in the First World War and the white snow cover of northern Canada. The flag was adopted in 1965 and one of the reasons is said to be that Canada could not send any peacekeeping troops in connection with the Suez crisis due to its then flag. The flag used was a British flag, Red Sign, which is completely red with the British Union Jack inset on the left.

The world’s second largest land area. It is divided into 5 natural regions: «The marine provinces» are located on the Atlantic coast, are mountainous, cold and have tundra vegetation. “Canada’s Shield” is an area of ​​crystalline sand, covered by large forests and rich in mineral resources. Forests cover more than half of the arable land. In the southern boundary of the Great Lakes and the Saint Laurence River there are large flat and fertile plains. 60% of the population lives here, and there are the big cities. In the southwestern region there is an extensive agricultural production: wheat, potatoes, oats and barley. The area facing the Pacific Ocean is mountainous and covered with large forests. The “Great North” is sparsely populated. The climate is very cold and the vegetation is tundra-like.

The country has large mineral resources. It is the world’s largest producer of asbestos, nickel, zinc and silver and the second largest producer of uranium. There are great resources of lead, copper, sulfur, gold, iron, gas and oil. The discharge of flue gases from industries in the United States and Canada contributes to the creation of “acid rain” that has damaged thousands of lakes. The building of a number of Quebec hydroelectric plants threatens to destroy the land and economy of the indigenous population.

The country is only a limited state of law. Like other Western countries, since 2001, with reference to «terror», it has taken the opportunity to curtail human rights on a number of fundamental points. The country’s criminal law is now contrary to the UN Convention on Human Rights.

The people: In Canada, there are about 800,000 indigenous peoples, mestizos and Inuit people (Eskimos) living a very diverse life, from integrated in urban culture to traditional hunter communities in remote communities all over the north. They have 6 cultural regions and 10 different tribes. Many of the languages ​​like cree and ojibwa are still used today. About 350,000 are considered indigenous people. Ie they belong to one of the 573 different groups registered in Canada and have the right to live in reserves under federal protection – even if only 70% have chosen this option. The Mestizas (the ethnic blends) and those of the indigenous population who have not been registered do not enjoy any legal recognition, but in practice have nevertheless acquired a number of special rights. About 45% of Canadians are descendants of Englishmen, 29% of French, 3.4% of Germans, 2.8% of Italians, 2.2% of Chinese, 1.5% of Ukrainians and 1.3% of Dutch. The rest has Portuguese, Latin American or other ethnic backgrounds.

Religion: Catholicism is dominant (45.7%) followed by Protestantism (36.3%). There are also Jews, Muslims, Buddhists, Hindus and 12.4% of the population declare themselves atheists.

Languages: English and French are the official languages. 13% of the population is bilingual, 67% speak only English, 18% speak only French and 2% speak other languages ​​(Italian, German and Ukrainian).

Government: Governor General appointed by British Crown: Julie Payette (since October 2017). Prime Minister and Head of Government: Justin Trudeau since November 2015. Canada is a parliamentary federal state and is a member of the British Commonwealth. The Senate has 104 seats and Congress 308.

Regions with self-government schemes within Canada: Nunavik and Nunavut. In the mid-90’s, Nunavut was granted a self-governing scheme (such as Greenland’s home rule scheme within the Danish state community). Nunavik is seen in Inuit’s eyes as a region in itself as well.