Where is Canada located on the map? Canada is an independent nation located in North America. Check out the following images to see location of Canada on maps. 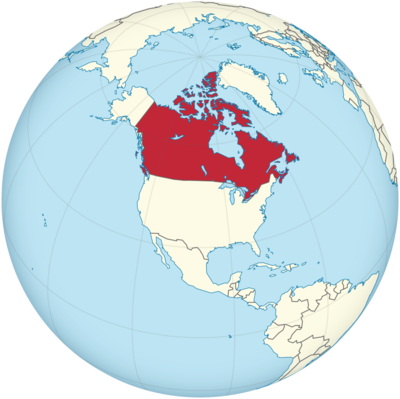 Canada is in North America, in the far north. The west is bounded by the Pacific, the east by the Atlantic. In the north lies the Arctic Ocean (also known as the Arctic Ocean ). There are only land borders with the USA: The state of Alaska is located in the northwest of Canada, other states border Canada in the south. At 8891 kilometers, this border is the longest land border between two countries in the world.

Canada is the second largest country in the world after Russia. It has an area almost as big as all of Europe! In terms of residents, however, it is only 38th in the world. This clearly shows that Canada is a sparsely populated country. Due to its size, Canada has six time zones.

Canada is in North America.

On the map you can see that Canada is very mountainous in the west and that the highest mountains are here. They belong to the Coast Mountains (“Coast Mountains”), the Cascade Mountains and the Rocky Mountains. Many of the mountains are volcanoes. The western coast is very rugged with fjords. Off the coast is Vancouver Island.

The rest of the country is hilly or flat. The Appalachian Mountains run in eastern Canada, the highest peak of which is Mount Mitchell at 2037 meters.

To the north there are many islands in the Arctic Ocean. They belong to the Canadian Arctic archipelago. Mainly Inuit live here. The landscape is a treeless tundra. The largest of the islands here is Baffin Island. There are 36,000 islands in total. You can also see on the map that the eastern islands are more mountainous. They are only separated from Greenland, which belongs to Denmark, in the north by a 30 kilometer wide strait.

The Hudson Bay (Hudson Bay) has a connection to both the Atlantic and the Arctic Ocean. There are also some islands in this bay.

Canada is a very water-rich country with many lakes and rivers. The largest lakes are in the northwest: the Great Bear Lake and the Great Slave Lake. The entire north belongs to the subpolar vegetation zone of the tundra. To the south, the taiga spreads across the country, the zone of the northern coniferous forests.

The Great Lakes are in the southeast. The border with the USA runs through four of the lakes. This is where the mixed and deciduous forests begin.

Many rivers also run through Canada. The longest is the St. Lawrence River. It flows from the easternmost of the Great Lakes, Lake Ontario, into the Atlantic and is 3,058 kilometers long.

There is a lot to see in Canada. The Niagara waterfalls on the border with the USA are famous. The rope bridge over the Capilano River also attracts many visitors. Many tourists come to enjoy the country’s beautiful nature. But of course cities like Toronto or Vancouver also offer many sights.

Long, cold winters and short, hot summers are typical of most of Canada. This is called a continental climate . In the north there is a polar and sub-polar climate. Here the ground is partly permanently frozen, the landscape here is the tundra. Only low shrubs, mosses and lichens grow. In the far north there are areas where there is snow all year round.

Western Canada has a maritime climate with a lot of rain. The seasons are most pronounced in the eastern provinces of Quebec and Ontario. Winter is cold, spring and autumn are mild, and summer is often humid and hot.