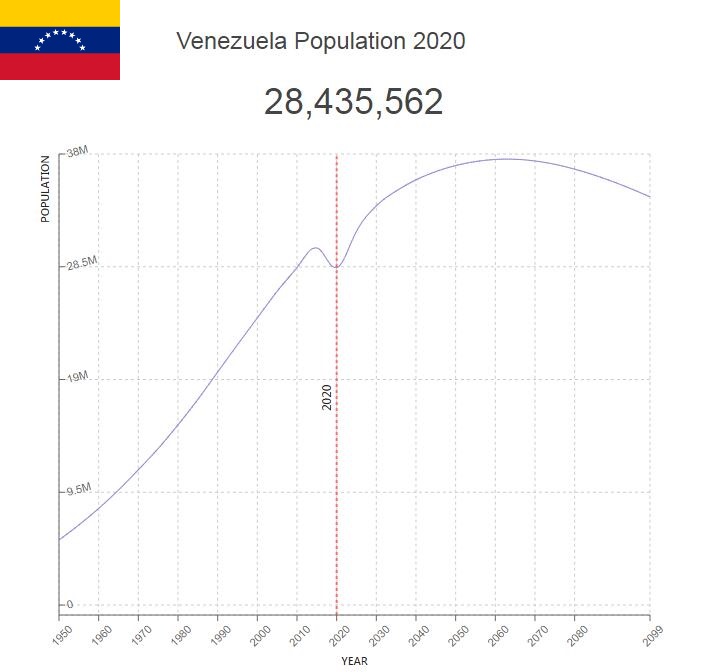 Venezuela has the world’s largest oil reserves, and the country is entirely dependent on oil revenues. The money was spent on social programs under President Hugo Chávez (1999-2013), until the oil price plunged in 2014. Now the country is in a humanitarian crisis, under an increasingly authoritarian and corrupt regime. 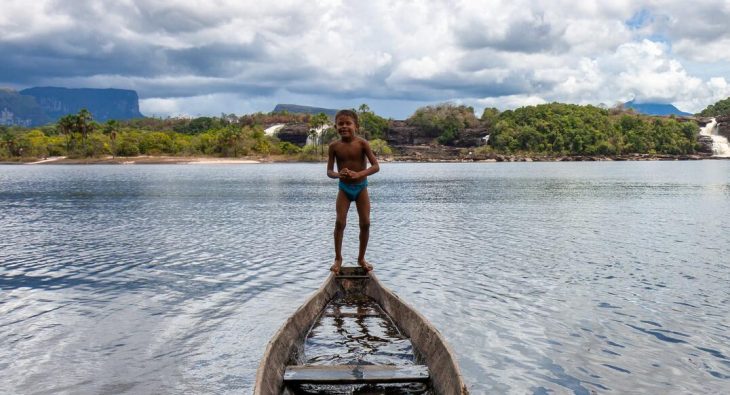 The escalating economic crisis since 2014 has led to a humanitarian crisis in the form of hunger, drug shortages and migration out of the country. By the end of 2018, the number of Venezuelans abroad was estimated to be three million, compared to just under 700,000 in 2015.

Population of Venezuela by Year (Historical)

Major Cities in Venezuela by Population

In pre-Columbian times, the people of present-day Venezuela consisted of a number of Caribbean- and Arawak- speaking indigenous groups. Possibly as many as one million people lived on what is now Venezuelan territory when colonialization began in the 16th century. The indigenous population was greatly reduced after a short time due to massacres, illness and slavery.

Immigration in several different phases throughout history, as well as the introduction of slaves from Africa, has created a population composed of Spanish, Italian, Portuguese, Arabic, German, African and indigenous people. The country also has a large immigrant group from other Latin American countries, especially neighboring Colombia.

About two percent of the population belongs to indigenous groups, the highest proportion of indigenous people found in the states of Amazonas and Zulia. There are estimated to be at least 26 different indigenous groups in the country; among the largest are guajiro, warao, piaroa, yanomamo and bari (motilon).

Venezuela has traditionally had a very high population growth. Only during the 1970s and 1980s did the growth rate begin to decline.

The average population density is 33.74 people per square kilometer, but the country is unevenly inhabited; the areas south and east of Orinoco have only about four percent of the population, while the coastal and valley areas in the north are densely populated.

Living standards increased and poverty dropped significantly from 2004 to 2012 as a result of economic boom and a comprehensive expansion of the education system, health care and other welfare services. However, since 2014, the population has undergone a dramatic fall in living standards as a result of a major economic crisis. This has also led to an increase in key indicators such as infant mortality, maternal mortality, and child malnutrition. However, there are few official figures available in recent years.

The government has not published poverty statistics since 2015, but a survey conducted by the country’s largest private universities estimates the income-based poverty rate in 2017 to be 87 percent.

Venezuela had a net migration rate of -1.2 in 2017. According to the United Nations High Commissioner for Refugees (UNCHR), by the end of 2018, there were three million migrants and refugees from Venezuela worldwide. 2.4 million of these are in neighboring countries in South America and the Caribbean, while the most resourceful migrants are moving to the US and Europe.

The largest receiving country is Colombia with one million migrants, and many cross the border between Venezuela and Colombia on foot. Furthermore, Peru, Ecuador, Argentina, Chile and Brazil are the largest receiving countries. There have been several reports of Venezuelans being exposed to racism, exploitation, discrimination and harassment in the countries they are migrating to.

The reasons why Venezuelans leave the country are complex, including unemployment, crime, lack of purchasing power to meet basic needs including food and medicine, lack of access to social services and fear of political persecution. Since 2014, there has been a 2000 percent increase in asylum applications provided by Venezuelans worldwide; in 2017, the figure was a total of 94,284 applications.

The official language is Spanish. Most local indigenous languages ​​belong to the carib, arawak and chibcha language groups.