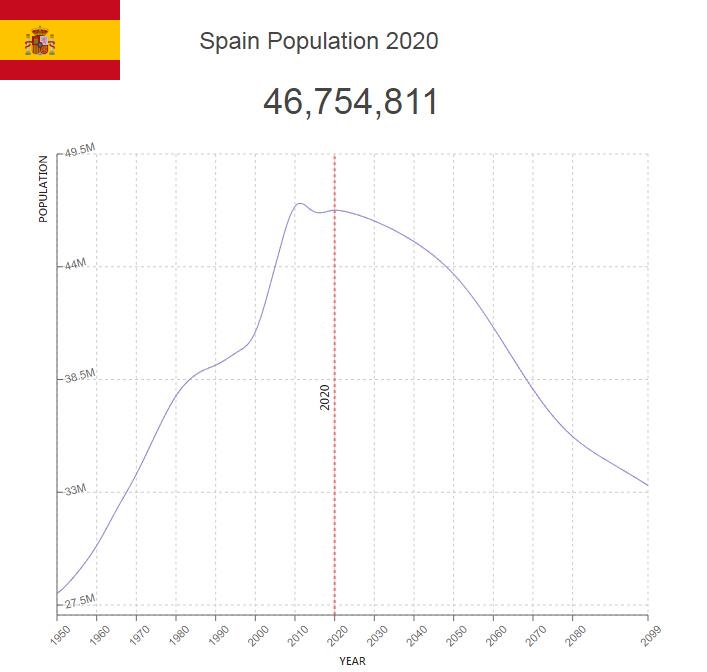 Spain is one of Europe’s oldest states. The Spanish conquerors made the country a world power, and in recent times Spain has gone from bloody civil war to becoming a popular destination. The high unemployment rate in Spain is a major societal problem, and especially many young people are left without a job.

The population in Spain was estimated at 46.9 million in 2019. In the period 2000-2010, annual population growth was 1.5 percent, but this trend has reversed. From 2013, a decline in the population was registered for the first time in thirty years. The birthrate was on the way down for a long time, but increased somewhat in the 2000s, mainly due to high birth rates among immigrant women. Despite this, Spain has one of Europe’s lowest birth rates, with 7.86 per 1,000 residents in 2019. 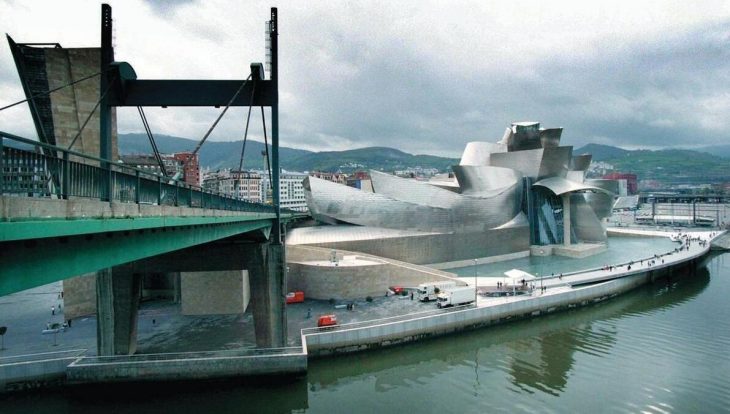 The total fertility rate is 1.25 per woman (2019). One important reason for the low birth rates is that Spanish women postpone childbirth well into the fertile age. In 2019, the average age of births was 32 years. Life expectancy is high, with 85.89 years for women and 80.52 years for men.

Spain has traditionally had great emigration to Latin America. However, since the mid-1950s, emigration to countries in Western Europe has been considerably greater, an estimated around 1 million people. Germany, France and Switzerland have been important recipient countries. In the early 2000s, immigration was far greater than emigration, and the proportion of foreigners in the population increased from 2.3 percent in 2000 to 12.2 percent in 2010.

The largest group of immigrants in Spain comes from Morocco, followed by Romania, the United Kingdom, Italy and Colombia. In recent years there has been a sharp increase in the number of immigrants from Venezuela. Spain is also a country that has experienced significant immigration of pensioners from other countries in Europe, of which an estimated 20,000 Norwegians.

The population of Spain is culturally quite homogeneous, despite the fact that the country has been conquered by a number of peoples throughout history. In the south (Andalucía) there are some Arab features in the population following the long dominance of the Moors in this part of the country. The Gypsies stand out as their own people, with their own culture and way of life.

In the Western European context, Spain is relatively sparsely populated, with around 92 residents per km2 (2018). In general, coastal areas along the Mediterranean and the Bay of Biscay, as well as the Balearic Islands and the Canary Islands, are densely populated. Particularly high density is found around the cities of Barcelona and Madrid, with 500–750 residents per km2. The inland areas are relatively thinly settled, and provinces such as Soria and Teruel have only nine residents per km2. There is also a constant relocation from these areas to the Madrid region or to the towns along the coast. In 2001, around 80 percent of the population lived in urban areas.

For Spain’s largest cities, see table at the bottom.

Population of Spain by Year (Historical)

Major Cities in Spain by Population

The Catholic Church has largely retained its position, despite extensive secularization of Spanish society, and almost 90 percent of the population is officially registered as members. Under the 1978 Constitution, Spain no longer has a state church, but the Catholic Church receives some financial support from the state. Protestants make up a few percent of the population.

Muslims make up 4 percent of the population of Spain with around 2 million (2019). Immigration of North Africans and Africans started in the 1960s and 1970s. This minority has been growing rapidly, and the dark numbers are considered large. The Abu Bakr Mosque in Madrid, the largest in Spain, opened in 1992 and is funded by Saudi Arabia. The regions with the most Muslims are Catalonia, Madrid, Andalucía, Valencia and Murcia, while Ceuta and Melilla are cities with a large proportion of Muslim residents. Only in 1992 was Islam recognized by the Spanish state in line with Christian denominations and the like Jewish faith community.

The Jewish minority is estimated at approximately 45,000 people.

Even before 200, the Christian was in Spain, and in the 300s there was a viable church. The real heyday of the Catholic Church first came with the transition to the Visigoths’ reign in 589. Muslim forces conquered the Visigothic kingdom in the early 700s. In keeping with the Qur’an, Christianity was tolerated, but persecution occurred.

In the 8th century Christian kingdoms arose in northern Spain. These gradually expanded their areas southward. Around 1250, most of the Iberian Peninsula had come under Christian rule, with the exception of Granada, which was Moorish until 1492. The fight against Islam strongly contributed to linking Spanish nationalism to the Catholic faith.

The 16th century was a time of prosperity for religious life, with the foundation of the Jesuit order and great Christian mystics such as John of the Cross and Teresa of Ávila. During this period, Catholic Christianity as the basis for Spanish identity was fortified.

The 19th century was influenced by the influence of French political and religious liberalism. The Liberals introduced a Freedom of Conscience Act in 1869, but in 1876 a constitution was drafted that recognized Catholicism as a state religion and set narrow limits to other faiths.

When the monarchy fell in 1931, the Spanish Republic introduced a separation between church and state, banned the Jesuit order and tried to close Catholic private schools. When a group of generals led by Francisco Franco rebelled in 1936, the church stood on the side of the rebels.

After Franco’s victory in 1939, the ties between church and state were re-established. In the 1960s, however, the ecclesiastical criticism of the regime grew stronger. After Franco’s death in 1975, the church was easily integrated into the new Spanish democracy.