Where is Spain located on the map? Spain is an independent nation located in Southern Europe. Check out the following images to see location of Spain on maps. 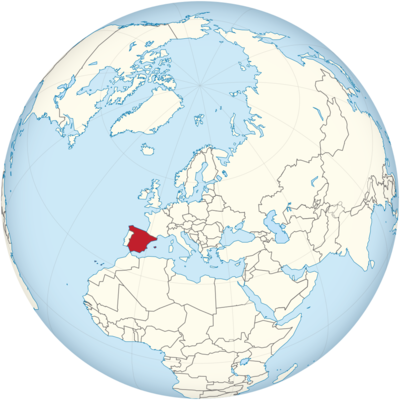 Together with Portugal and little Gibraltar (which belongs to Great Britain), Spain lies in the south-west of Europe on the Iberian Peninsula. It is surrounded by the Atlantic Ocean in the west and the Mediterranean Sea in the east. It is only connected to the rest of Europe in the north. There are the Pyrenees, a mountain range. Spain occupies most of the Iberian Peninsula.

Spain has land borders with Portugal, which occupies the southwestern part of the Iberian Peninsula, and with France in the north. In the Pyrenees lies the small country Andorra, which also borders on Spain. Because Gibraltar belongs to Great Britain, Spain also has a small border with Great Britain.

Spain is located in the southwest of Europe.

Spain is one of the largest countries in Europe if you measure the area. Only Russia, Ukraine and France are larger (although the greater part of Russia belongs to Asia). In terms of population, Spain ranks 6th in Europe.

In addition to the mainland, Spain also includes some islands and archipelagos. You may have heard of Mallorca or have been there yourself. Together with Menorca, Ibiza and Formentera, Mallorca belongs to the Balearic Islands (also known as the Balearic Islands for short). They are in the Mediterranean.

In the Atlantic, off the coast of West Africa, are the Canary Islands (Canaries). They include Tenerife, Fuerteventura, Gran Canaria, Lanzarote, La Palma, La Gomera and El Hierro.

Here you can see Spain with its largest cities and neighboring countries.

Spain is divided into 17 regions called “autonomous communities”. They are in turn divided into 50 provinces. The Basque Country and Catalonia have been fighting for independence from Spain for a long time. Andalusia in the south is the most populated region. The name comes from the Moors, who invaded here from North Africa in the 8th century and called the area Al-Andalus.

Finally, Spain also has several islands off the Moroccan coast and two cities in North Africa: Ceuta and Melilla. You can see their location on the map. Llívia is also located in the Pyrenees, surrounded by France. Ceuta, Melilla and Llívia are exclaves of Spain, which means they are outside the actual national territory in another state.

Some mountain ranges run through Spain. Five of the six large mountains lie in a west-east direction: the Pyrenees in the northeast, the Cantabrian Mountains in the northwest, the Central Cordillera in the middle, the Sierra Morena to the south and the Betic Cordillera in the south. It includes the Sierra Nevada Mountains with the highest point on the Spanish mainland (3482 meters). The highest mountain on Spanish territory, however, is the Pico del Teide on Tenerife (3718 meters).

The Iberian Mountains, however, run from northwest to southeast. The middle of the Iberian Peninsula is a high plain, a high plateau.

Spain has several climatic zones. The Mediterranean climate predominates. The summers are dry and hot, the winters mild and rainy. The amount of rain decreases from north to south. In the southeast, Spain is very dry.

On the north coast, which borders the Atlantic Ocean , Spain has a maritime climate. From west to east, this affects the regions of Galicia, Asturias, Cantabria and the Basque Country. It’s cooler than the rest of the country, but still mild. The temperature differences between day and night are not so great, as are those between summer and winter. Here it is often windy due to the proximity to the sea and it also rains more.

Inland there is a continental climate. The summers are very hot and dry, the winters very cold. Temperatures can fluctuate greatly in a day.

On the other hand, on the Canary Islands, which are located in the Atlantic Ocean off the coast of Africa, it is subtropical. Almost all year round it is the same warm, namely 18 to 24 degrees.