Flag of Saint Christopher and Nevis 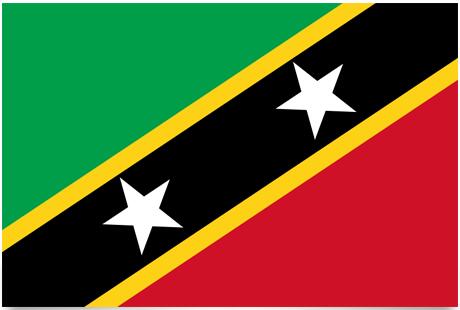 When the country reached its independence in 1983, it held a nationwide competition for a new flag for the nation. The winning entry was designed by Edrice Lewis and he is responsible for both the design and what colors and symbols should represent.

Green stands for the fertile earth, yellow is the sun and red stands for the struggle for freedom. The white stars in the black field are a symbol of hope and freedom. Nevis has its own flag, it is yellow with the national flag inscribed at the top of the flag’s inner edge and a picture of Nevis, a volcano, in the colors white, green and blue.

The country consists of the islands of St. Kitts (168.4 km2) and Nevis (93.2 km2), located in the small Antilles in the Caribbean. The islands are of volcanic origin and the landscape is hilly. The climate is tropical, rainy, but moderated somewhat by the sea.

The People: The population is predominantly a mixture of African slaves and Europeans. There is a small Indo-Pakistani minority and a small British minority.

Government: Timothy Harris has been prime minister since February 2015. Tapley Seaton was appointed Governor-General of the British Crown in May 2015. Parliament has 15 members (11 representatives from St. Kitts, 3 from Nevis and 1 appointed by the governor) as well as 3 nominated senators.