Flag of Saint Pierre and Miquelon 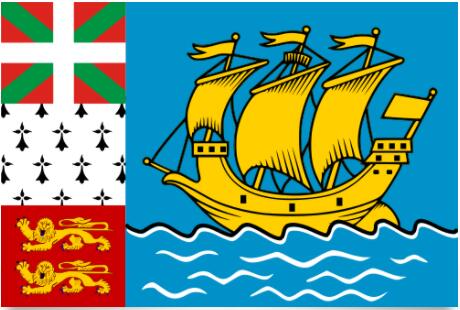 Saint-Pierre and Miquelon is a small archipelago located in northeastern North America and belongs to France.

Archipelago of 2 islands off the Canadian coast of the North Atlantic: Pierre (26 km2) and Miquelon which with Langlade covers an area of ​​216 km2. In addition, a dozen small islands. Their economy is almost totally dependent on fishing.

The People: The majority are descendants of French colonists.

Government: French overseas territory administered by a general council of 19 elected members and a prefect appointed by the French government – since August 2006: Ives Fauqueur. The Chairman of the Territorial Council of the Islands has been Stéphane Artano since March 2006. Artano was convicted of fraud in 2009. The archipelago has 1 representative respectively. the French Senate and Chamber of Deputies and a representative of the European Parliament.