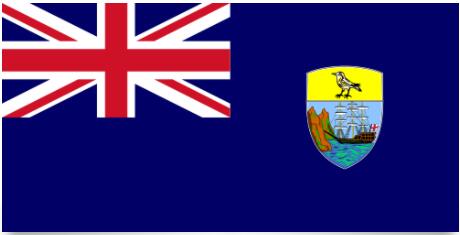 Island in the South Atlantic, 2,000 km from Angola on the west coast of Africa, immediately west of the GMT line. The island is of volcanic origin and is mountainous, but lacks natural resources and industry. The only productive activities are subsistence farming and fishing.

The people: The majority of the population is descended from Africans. About 6,000 of the island’s population has emigrated over the years to South Africa and the United Kingdom.

Capital: Jamestown, 714 residents (2008). In the interior of the island is Longwood, where Napoleon Bonaparte sought asylum.

Government: Mark Andrew Capes, Governor appointed by the British Crown in July 2011. There is an executive and legislative council with 15 seats. 12 members are elected by free elections for a 4-year term. Furthermore, the governor and two former officials have a seat on the council.

Saint Helena was uninhabited when Portuguese sailors reached it in 1502. In 1659, the British East Asian Company established a branch on the island, and since then it has been a British colony. The island is of very limited economic importance, but became known when Napoleon was granted asylum on it from 1815 until his death in 1821. Half a century later, Malvinas (Falklands) waged it again on the front pages of newspapers.

“We could not have captured the Falklands had it not been for Ascensión or Saint Helena,” a British MP assured in 1982. It is against this background that the British accept the high cost of preserving the colony paid over by the British Colonial Ministry. In the case of Ascención, the British share the expense with the United States. This island serves as a North American base and advanced point for the Royal Air Force.

For the UN, the situation is different. The position of the World Organization is that every people, no matter how small and poor their country may be, has the right to self-determination and independence. In December 1984, the United Nations General Assembly passed a resolution that only Washington and London voted against, urging the United Kingdom to re-launch the island’s fisheries, crafts and forestry, and to keep the people informed of its right to independence. At the same time, the resolution condemns the presence of the base at Ascención, since such bases should not be found in non-autonomous areas.

On January 1, 1989, a new constitution came into force giving greater powers to the Legislative Council and allowing public servants to stand in elections – with the Governor’s approval. At the same time, the new constitution lowered the voting age to 18 years.

Fishing is the island’s only export business. In recent years there has also been a sharp decline in fishing. While in 1985, 27.2 tons were exported, in 1990 it had dropped to 9.2 tons.

Saint Helena is interesting for science because of its rare flora and fauna. The island has 40 species of plants that are not found anywhere else on earth.

In April 1997, five members of the government resigned due to dissatisfaction with cuts in the island’s budgets and Governor David Smallman’s “dictatorial” inclinations. Unemployment reached 18%. At the same time, sections of the population demanded their British citizenship, which had been deprived of them in 1981.

In May 2002, the 500th anniversary of the discovery of the island was celebrated with a series of maritime and cultural events. As part of the festivities, a museum was opened in Jamestown where the island’s story was told.

In the 2003 decision, the British crown decided to appoint a new governor of Saint Helena. In October 2004, Michael Clancy took over the post, replacing David Hollamby.

Decades ago, the British government acquired a ship, which remains the only means of transport to reach the island. In recent years he discussed the building of an airport, but this idea is not fully shared among residents who fear that their isolated paradise could be damaged.

Saint Helena is the only UK overseas territory to receive regular financial aid in compensation for its limited economic activity.

In 2006, a project was adopted on the construction of an airport, luxury hotels and a golf course until 2010. The project aims to generate revenue for the islands, reducing their dependence on grants from the UK and the EU. However, environmental activists are critical of the project and its impact on the local flora and fauna, which is considered the world’s rarest and most valuable. The islands have 20 invertebrate and 40 plant species not found in other parts of the world.

In 2011, the UK government announced it would invest $ 200 million. £ in the building of a new airport to be completed in 2016. The airport has a military strategic aim and also has to make the island more accessible for tourism. Initially, it will only be flown from South Africa.