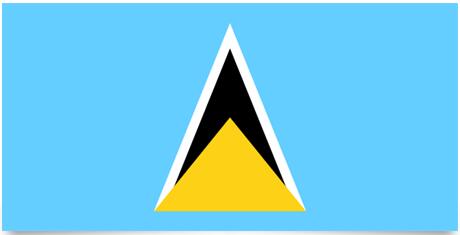 The triangle represents the two highest peaks Gros Piton and Petit Piton. The black and white color of the triangle is a symbol of the influence both Africans and Europeans have had on the culture. Yellow stands for the sun that shines brightly over the islands and is seen as a symbol of prosperity. The light turquoise color is the sky and the sea.

The yellow and black triangles are also said to be a symbol of the two volcanic peaks Two Pitons at Soufrière. The flag was designed by a local artist named Dunstan St. Omer. The flag was adopted on February 22, 1979.

Located in the small Antilles in the Caribbean, south of Martinique and north of St. Vincent. The island’s origin is volcanic, the climate is tropical and rainy, but moderates some of the surrounding sea. The soil is fertile and is used for growing bananas, cocoa, sugar cane and coconut.

The People: The majority of the population is descended from African slaves. Furthermore, mulattoes and a small minority of Europeans.

Government: Calliopa Pearlette Louisy is Governor General, appointed by the British Crown in 1999. Allen Chastanet has been Prime Minister since June 2016. Parliament has 17 seats.