Flag of Saint Vincent and the Grenadines 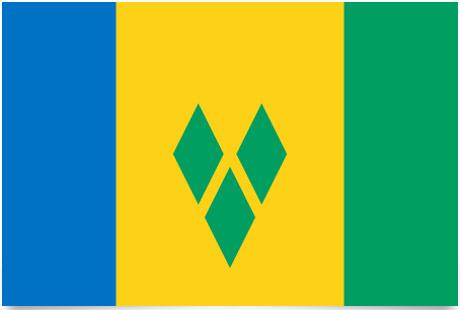 Blue stands for the sky and the sea, yellow is the sun, and green is the great vegetation of the land. Previously, the country’s coat of arms was in the middle of the flag but has been replaced by three green rhombuses that refer to the nickname for the country; Jewels of the Antilles. The flag was adopted on October 21, 1985, but the coat of arms was changed to the Romans in 1991.

The flag used during the country became independent, in 1979, with the coat of arms not becoming very popular with the population. A competition was announced in 1985, but none of the proposals was considered good enough to become a national flag. A Swiss graphic artist was commissioned to design the flag.

The country consists of the main island of St. Vincent (345 km2) and the southern archipelago of Grenadines (43 km2), whose main islands are Bequia, Baliceau, Canouan, Mystique, Mayreau, Quatre, Savan and Union. The island’s origin is volcanic, the landscape is hilly and with fertile soils. The climate is tropical, rainy but slightly moderated by the surrounding sea. The country is a major producer of arrowroot used in the production of a special type of paper used in electronics.

The people: descendants of African slaves 82%, mulattos 14%. Furthermore, there are small minorities of Europeans, Asians and indigenous peoples.

Language: English (official). Furthermore, a local dialect is spoken by English, which also contains elements from French and African languages.

Official name: Commonwealth of Saint Vincent and the Grenadines.

Government: Frederick Ballantyne is the Governor-General, appointed by the British Crown in 2002. Since March 2001, Ralph Gonsalves is Prime Minister and Head of Government; re-elected in 2005, 11 and 15. Parliament has 21 members.