Where is St. Lucia located on the map? St. Lucia is an independent nation located in North America. Check out the following images to see location of Saint Lucia on maps. 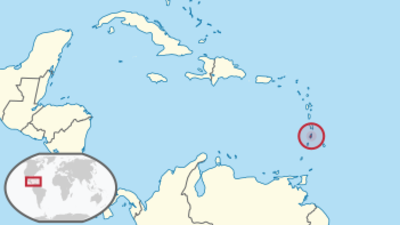 St. Lucia is in the Caribbean. There the island belongs to the Lesser Antilles. St. Lucia lies between Martinique in the north (which belongs to France) and another island state, St. Vincent and the Grenadines. St. Lucia is 43 kilometers long and 22 kilometers wide at its widest point. The east coast faces the Atlantic and is more exposed to the wind. This makes it more rugged than the west coast, which faces the Caribbean Sea.

The island is made up of volcanic rock. The highest mountain on the island is Mount Gimie with a height of 950 meters. It is located in the southwest of the island, as are two other elevations: Gros Piton and Petit Piton (Large and Small Piton) are two no longer active volcanoes and a popular photo opportunity. They are 770 and 743 meters high.

There are several small rivers. The longest are Cul de Sac (which is French and means dead end) and Canelles.

St. Lucia is in the Caribbean. The climate is tropical. It’s warm here all year round. Therefore one does not differentiate between seasons. It is an average of 29 degrees during the day and 18 degrees at night. Between June and November it rains more than usual. Then is the time when hurricanes can hit the island. These tropical storms usually cause great damage.