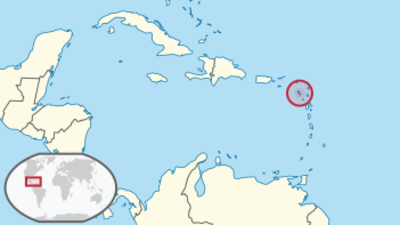 St. Kitts is the larger of the two islands. Her previous name was St. Christopher. St. Kitts has three volcanoes separated by deep valleys. The three elevations are easy to see on the map. St. Kitts is elongated and becomes very narrow towards the southeast, only to widen again a little. The highest mountain on St. Kitts is Mount Liamuiga at 1156 meters.

A three kilometer wide canal separates St. Kitts from Nevis. In this channel is the small island Booby Island , which also belongs to the island state. It is only 100 meters in diameter. Translated, the name means “booby island”. A lot of boobies live here, they are birds.

Nevis is a fairly round island with the highest mountain in the middle. It’s Nevis Peak, 985 meters high. It’s the remnant of an ancient volcano.

The map shows the surface of St. Kitts (left) and Nevis (right).

St. Kitts and Nevis is in the tropics, so it’s pretty hot here. Trade winds soften the heat somewhat. The residents do not know snow – neither do the seasons like ours. The temperatures hardly fluctuate over the year and are around 27 degrees. Instead, a distinction is made between a dry and a rainy season. December to April is the dry season, with some rain falling during this time as well. From May to November is the rainy season, then significantly more rain falls. The islands are in the hurricane tracks.