Ecuador, state of northwestern South America, at the equator; 283,500 km2, 17.1 million residents (2019).Ecuador also includes the Galápagos Islands in the Pacific, about 1,000 km from the mainland. Administratively, Ecuador is divided into 24 provinces, of which the Galápagos Islands are one. The capital is Quito.

Ecuador is crossed in a north-south direction by the Andes mountain ranges. The narrower southern part of the country is completely met by the mountains, while the middle and northern parts have wide lowland areas in both the west and the east.

Politically and constitutionally, Ecuador is one of the most unstable countries in Latin America. The country has had no less than 20 different statutes; it now comes into force in 2008. According to it, the country is ruled by a president who is both head of state and government. The President is elected by absolute majority for a term of four years. The country achieved full independence in 1830.

Ecuador is one of the world’s largest exporters of bananas, but since the 1970s, the oil industry has replaced agriculture as the most economically important sector. The large dependence on a few export products makes the economy vulnerable and vulnerable to external influences. The hot water stream El Niño periodically causes weather disasters that adversely affect both agriculture and fishing. 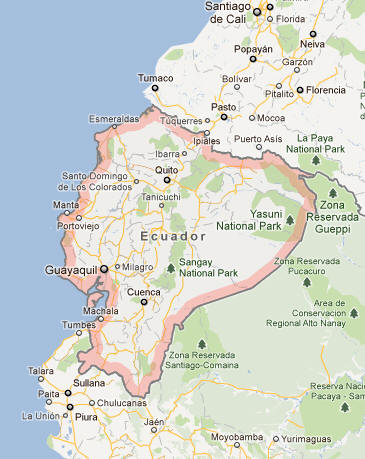