Where is Ecuador located on the map? Ecuador is an independent nation located in South America. Check out the following images to see location of Ecuador on maps. 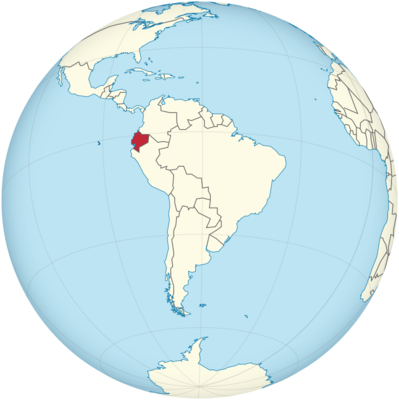 Ecuador is located in the northwest of South America. It borders Colombia to the north and Peru to the east and south. To the west lies the Pacific.

Ecuador is the fourth smallest state in South America (after Suriname, Uruguay and Guyana). Until the Spanish conquest, Ecuador belonged to the Inca Empire.

The map shows the landscapes of Ecuador. The lowlands of the coast are yellow-green, the highlands of the Andes are blue and the Amazon region is green.

The coastal region lies in the west of the country. It is about 200 kilometers wide and extends to the Andes. It comprises alluvial land and then low hilly land. Directly on the coast runs a low mountain range, the coastal cordillera. Their height is a maximum of 800 meters.

Guayaquil is the largest city in the country with 2.5 million residents. Opposite Guayaquil is the city of Durán. It has only about 230,000 residents, but is growing rapidly. Both cities are connected by a 2285 meter long bridge. There are 13 islands in the Gulf of Guayaquil. The largest of them is puna.

The Galápagos Islands are part of Ecuador, around 1000 kilometers from the mainland. The name Galápagos means “bulbous saddle”. This refers to the Galápagos tortoises, some species of which have a bulge on the neck.

More than 100 islands belong to the Galápagos Islands. Only 13 islands are larger than 10 square kilometers. The main island is called Isabela. It is by far the largest of the islands. There are six volcanoes on it, the highest being the Wolf volcano at 1707 meters.

A plateau lies between the two mountain ranges. It is between 1,800 and 3,200 meters high. Mountain bars divide the highlands into several valleys.

To the east ( Oriente in Spanish) of the Andes lies the lowlands of the Amazon basin. The Amazon basin is the catchment area of ​​the Amazon River. It covers almost all of the northern half of South America and is covered with rainforest. In Ecuador, too, there is dense rainforest in this area. Incidentally, the “belly” that the area forms on the map did not always exist. In 1942, Ecuador had to surrender the area south of it to Peru. With that, it also lost access to the Amazon.

Several rivers flow from this area to the Amazon, such as the Río Napo, the Río Pastaza or the Río Putumayo, the border river to Colombia.

Ecuador is in the tropics. Temperatures hardly fluctuate over the year. It’s always the same warm here. How warm it is depends mainly on the altitude. It gets pretty hot on the coast and especially in the Amazon lowlands. In the mountains, the temperature decreases with altitude. In Quito, the average annual temperature is 13 degrees. The differences between day and night are generally greater than the fluctuations in temperature over the year.

The amount of rain that falls in Ecuador is very diverse. There are regions that are always humid, such as the northern coastal area or the Amazon lowlands, where tropical rainforest grows. In the Andes, there is a lot of rain on the east and west slopes, while the valleys don’t get much.

The coastal region can be divided into two areas in terms of climate. That has to do with the Humboldt Current. This cool ocean current hits the coast of Ecuador (at 1 degree south latitude) and then deflects to the west. It not only cools the sea here, but also the air. The north of the coastal region is tropical and humid and the south semi-arid (semiarid). There are only three to five wet months a year here. This rainy season is between January and April. The average annual temperature in Guayaquil, for example, is 25 degrees.

It is not tropical hot on the Galápagos Islands, but only moderately warm, although the islands are close to the equator. This is also due to the cool Humboldt Current. There is a rainy season from January to June. Then the northeast trade wind blows and brings mild air with it. Most of the rain falls in April. The dry season is between July and December, when there is almost no rain. The southeast passat now brings cooler air.