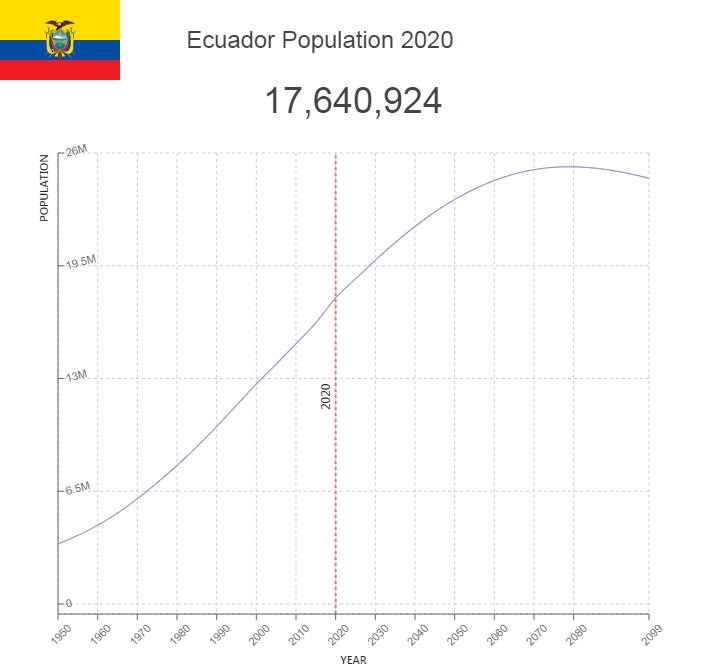 Ecuador is the world’s largest banana producer, but the country lives on oil revenues. Economic crises and political turmoil have characterized politics for many years, but the country has experienced political stability since Rafael Correa became president (2007-2017). 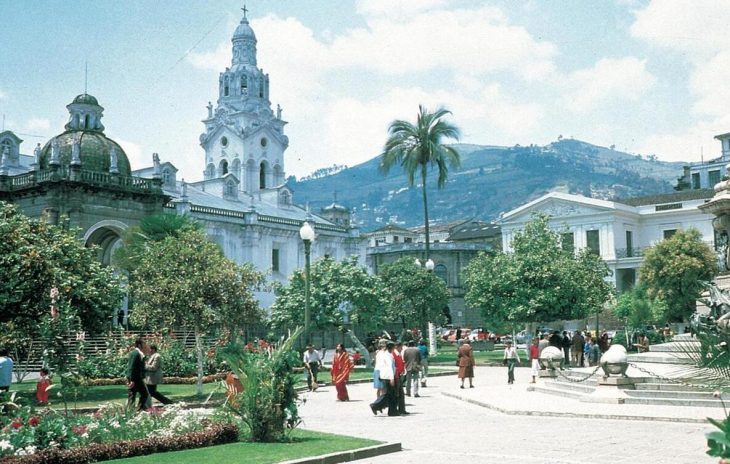 The population is relatively young, but the average age is rising. Fewer children are born and people are living longer. After many years of large population growth, it has stagnated, and every woman gives birth to an average of 1.8 children (2010). Ecuador holds third place for high life expectancy on the American continent after Canada and Chile, but ahead of the US. The village of Vilcabamba in the southern part of the Andean region has attracted international attention for its high number of active hundreds of years.

The proportion of illiterate people over the age of 15 is estimated at 6.8 percent.

Population of Ecuador by Year (Historical)

Major Cities in Ecuador by Population

Ecuador is the most densely populated country in South America. Most live in the coastal region (La Costa) and the duck region (Las Sierras) which make up about half the country. The region east of the Andes (El Oriente), which makes up the other half, consists largely of rainforest and is sparsely populated.

From the late 1990s, many Ecuadorians, mainly to Europe, Spain and Italy, but also to the United States and Canada, emigrated to find work. After the economic crisis in 2009, many have returned. At the same time, there are migrations to Ecuador from other South American countries, especially neighboring Colombia and Peru. It is estimated that half a million Colombians and approximately 200,000 Peruvians live in the country. Many have fled the riots in Colombia. The dollar as a currency also makes it attractive to look for work in Ecuador.

In 2017 and 2018, there has been a huge influx of Venezuelans who have left their country due to the economic crisis. They usually arrive in Ecuador from the Colombian border in the north. Authorities estimate that by the fall of 2018, there were 250,000 Venezuelans in Ecuador. However, many of them are considered to be traveling to Peru or Chile.

The Constitution of 1998 states that Ecuador is multiethnic and multicultural. The aim is that most of the population is descendants of both indigenous and Europeans. There are also African-related features. The cultural picture is broken between the different regions; coast, mountains and rainforest.

According to the 2010 census, 71.9 percent identified themselves as mastics, 7 percent as indigenous people, 6.1 percent as white, 7.2 percent as Afro-Ecuadorians, and 7.4 percent as Montubios. This census encouraged people to state first and foremost where they felt culturally at home. It may have been a tendency to designate white or mestizo, as these are at the top of the traditional social ladder. More technical studies have estimated that the number of indigenous peoples is higher, without being able to give a good explanation.

The aphids, which nevertheless make up the vast majority, have both native American and European genes. They are dominant throughout the country, but the proportion is highest in the mountain region. The Spanish conquerors and immigrants who arrived in the mid-1500s were largely men. They made connections with women from the indigenous population and had children with them. Later, many were born under extramarital circumstances. Some of them were included in the father’s family as second-class members. Others were referred to live with their mother in her village. Eventually, the Mistis manifested themselves as a separate group. In the colonial period, they were a middle class working on crafts; carpenters, tailors and masons, or they were businessmen on a smaller scale. On the large farms – the hacienda– they often served as administrators or printers. There were also many talented artists among them who did outstanding work on the construction and decoration of the numerous churches in the country. During the Liberal Revolution of 1895, the idea of ​​Ecuador as a Mistisian nation was born.

The whites are of European, mainly Spanish origin.

The Montubians (los montubios), a separate Ecuadorian group, are relatively white in skin but with mostly Mistonian features. They are mostly farmers living in the lowlands between the coast and the Andes.

Africans were transported as slaves to replace indigenous people as labor in the hottest areas. Some also made their way to the Ecuadorian coast of Esmeraldas after a shipwreck and established freedom there. Slavery was officially abolished in 1851. Most Afro-Ecuadorians still live in the province of Esmeraldas northwest of the country, but there is also a significant settlement in the highlands around Zamora.

The indigenous population, as previously, denoted as “Indians” (indios), the country’s original residents when the Spaniards arrived, ushering in the European immigration. It is believed that the indigenous population was significantly reduced following battles against the Spaniards and diseases they brought with them. The indigenous people today live in the rural areas of the mountains and in the Amazon. There are different tribes, or nations, with their own languages ​​and customs. The largest nation is Kichwa, which is located in different areas throughout the Andean region. Chachi, Awà and Tsàchila hold to the north of the coastal region. In the Amazon region we find Shuar, Cofan, Achuar, Siona, Amazonaskichwaer and Huaroani. In the rainforest there are also people without contact with the rest of the community. These are called Taromenane or Tagaeri. We know little about these, but there have been violent conflicts, including killings, between the Taromenans and the Huaroanis. The progressive oil recovery in the rainforest threatens their isolated existence.

In a survey conducted in 2012, 91.55 percent of respondents said they perceived themselves as religious, 7.94 percent were atheists and 0.11 percent were agnostics.

Of the religious, 80.4 percent were Catholics and 11.3 percent were Evangelical Christians (Protestants). Of the others, there were Jehovah’s Witnesses, Mormons, and Buddhists.

The Catholic Church and Catholicism have had and have a significant role in Ecuador. Until 1895, it had a religious monopoly until “The Liberal Revolution” dissolved the state church and introduced religious freedom. At the same time, the state created public registries for censorship and marriage.

The church nevertheless maintained a good grip on people’s daily lives. Most private schools and universities are Catholic. 60.2 percent state that they attend church regularly. The support of religious celebrations and the celebration of religious patron saints is formidable. Thousands gather for progressions on Good Friday and in honor of the Virgin of Cisne in Loja in September.

Nevertheless, evangelical missionaries, mainly from the United States, have made progress. They work in poor areas in the cities and among the indigenous people in the countryside. They are actively pursuing welfare work for poor families, which has contributed to their success. Some of the reasons may also be the Catholic Church’s conservatism and support for large landowners in their conflicts with the indigenous people.

Spanish is the official language. In addition, 13 different languages ​​are still practiced among the indigenous people. Several of these describe researchers as endangered. In the rainforest areas, there are languages ​​spoken by only about 300 people. Spanish is the only language taught in schools. The urbanization and modernization of the country, television and the internet have made Spanish even more dominant and displaced the other native languages.

Of the minority languages, kichwa is by far the largest group of 591 448 practitioners. This is a variant of the Peruvian quechua that was the language of the Incas. Ecuador is spoken in the mountainous regions with a center of gravity in the provinces of Chimborazo and Imbabura. A national plan has been made to strengthen kichwa as part of indigenous culture. Among other things, it will be introduced as a third language in 605 schools. Over the course of ten years, the authorities want to set up a school with Kichwa as their language of instruction.