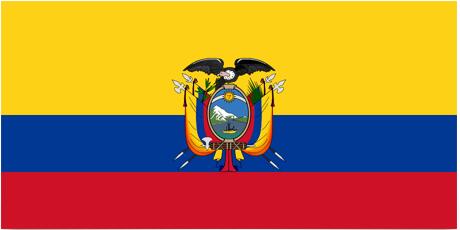 The Ecuadorian state and national flag has a picture of the country’s coat of arms in the middle, but the flag used by the citizens lacks this picture. The yellow color stands for all the riches of nature and the sun, the blue is a representation of the sea and the sky and the red in the flag is a symbol of the blood sacrificed in their struggle for an independent Ecuador.

Ecuador’s adopted Greater Colombia’s old flag as its national flag in 1860, but in 1900 the image of the coat of arms was inserted. The flag used by the citizens thus looks exactly the same as the Colombian flag. The flag of Venezuela has the same origin as the flag of Ecuador.

The country can be divided into 3 natural regions: the coast, the highlands and the Amazon. Over half the population lives in the coastal area, where economic life is dominated by the production of export crops bananas, cocoa, rice and coffee. The highlands lie between the two ridges that form part of the Andean chain and are characterized by subsistence agriculture. The country also consists of the Galápagos Islands. In the Amazon area, oil is extracted, which provides foreign currency to the country, which in turn will destroy its nature. In the coastal area 95% of the original forests have been felled and the soil erosion has increased in recent years.

The People: The Ecuadorians are descended predominantly from the Quechua people who, prior to the Spanish invasion, were led by the kingdom of Quito. The population is also characterized by the mix with the Spaniards and African slaves. There are 9 indigenous peoples: Huaorani, Shuar, Achar, Siona-Secoya, Cofan, Quechua, Tsachila and Chachi. The Quechua people in the highlands count 1½ million people.

Language: Spanish (official) although 40% of the population speak quechua.

Government: Lenín Moreno has been president since May 2017. Parliament has a chamber – the National Congress – which has 137 seats.